Violent protests erupted Friday in Lhasa, Tibet. Hundreds of demonstrators defied Chinese police and took to the streets, reportedly setting fire to several Chinese-owned businesses. The police appear to have responded with force.

Barnett says the protests are a disaster for both China and Tibet. 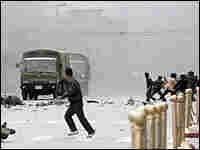 Tibetans throw stones at Chinese army vehicles as a car burns on a street in the Tibetan capital of Lhasa after violent protests broke out Friday. Stringer/AFP/Getty Images hide caption 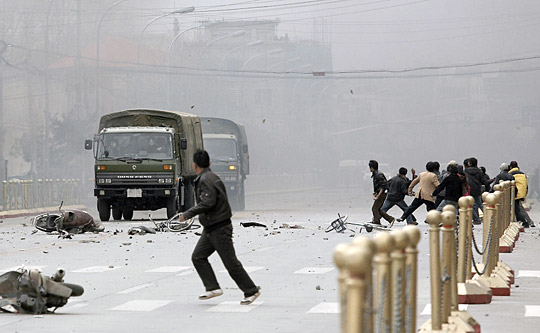 Tibetans throw stones at Chinese army vehicles as a car burns on a street in the Tibetan capital of Lhasa after violent protests broke out Friday.

Several days of protests in Tibet turned violent Friday, as demonstrators threw rocks and burned shops and cars in the capital, Lhasa, and casualties were reported.

The U.N. High Commissioner for Human Rights urged Beijing to respond with restraint, as did the United States and the European Union.

The protests appear to have caught China off-guard just months before it hosts the summer Olympics.

Eyewitness accounts say that Friday's violence was centered in Barkhor, the heart of old Lhasa and the site of similar violent protests nearly 20 years ago.

Reports say that demonstrators burned shops and vehicles in Barkhor and pelted police with stones.

The U.S. Embassy in China warned American travelers to stay off the streets.

The protests began peacefully on Monday. Monks from the three main Buddhist monasteries around Lhasa marched in remembrance of a failed 1959 uprising against Chinese rule.

From his home in exile in Dharamsala, India, Tibet's spiritual leader the Dalai Lama spoke then of "increasing brutality and repression" in Tibet.

"For nearly six decades, Tibetans in the whole of Tibet have had to live in a state of constant fear, intimidation and suspicion under Chinese repression," he said.

"But in addition to maintaining their religious faith, a sense of nationalism and their unique culture, the Tibetan people have been able to keep alive their basic aspiration for freedom."

In recent days, protesters have demonstrated outside Chinese diplomatic missions in several cities around the world. In India, police arrested about 100 protesters marching toward the border with Tibet.

Tsewang Rigzin is president of the Tibetan Youth Congress, a Dharamsala-based organization of exiles involved in the march. He says the run-up to the Beijing Olympics was the perfect opportunity to make a statement.

"This is a golden opportunity for our struggle. Tibet has been under Chinese occupation for the last 50 years, and we never had such an opportunity to shine the spotlight on the brutal Communist Chinese regime in Tibet," he says.

On Friday, the Dalai Lama appealed to China's leadership to address what he called the long-simmering resentment toward Chinese rule over Tibet.

China's government did not comment Friday on the escalation in violence. On Thursday, Qin Gang, China's Foreign Ministry spokesman, blamed the unrest on the Dalai Lama.

"This was a political plot carefully planned by the Dalai's group to separate Tibet from China and disrupt the normal, stable and harmonious life of the Tibetan people," he said.

Lodi Gyari is the Dalai Lama's envoy to the U.S. He says that now, just as 50 years ago, Tibetans are protesting restrictions on basic religious freedoms. And he has told the Chinese this in negotiations.

"I said … don't make mistakes again. Just go back and see what happened in the early, mid-1950s. But they never learn. They just think that they have the upper hand," he says.

Observers note that when the last wave of major unrest shook Tibet — in 1989 — the region's Communist Party boss did not hesitate to unleash a harsh military and political crackdown. That boss, Hu Jintao, is now China's president.