Accessibility links
Dance Craze Tecktonik Spreads Through Europe With the Macarena long past, a European dance craze is set to invade U.S. shores. The Tecktonik began just outside Paris, and is spreading to nightclubs and onto the streets across Europe. 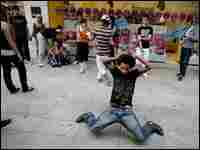 A teen dances the Tecktonik, an alternative dance form that has started spreading through nightclubs in Europe — and could be heading for U.S. shores. Fred Dufour/AFP/Getty Images hide caption 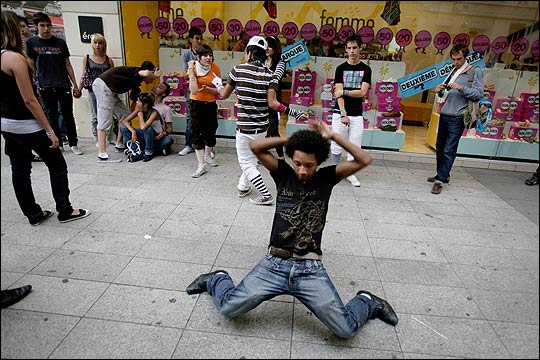 A teen dances the Tecktonik, an alternative dance form that has started spreading through nightclubs in Europe — and could be heading for U.S. shores.

Watch the Tecktonik performed in a variety of locations in this French video on AOL.

Learn how to Tecktonik in this video from YouTube.

With the Macarena long past, a new European dance craze is set to invade U.S. shores.

The Tecktonik began just outside Paris — and is spreading to nightclubs and onto the streets across Europe.

At the Metropolis, one of the biggest nightclubs in the Paris region, the music goes by a lot of different names. Electro. Jump style. Hard style. Hard core. But the only dance is the Tecktonik.

The customers at the club are mostly in their teens and early 20s, middle class, and from every ethnic background. They look as if they were raised by Madonna and Marilyn Manson.

Neon colors are the order of the day, as are slim jeans, tiny T-shirts and outrageous haircuts — a cross between a mohawk and a mullet.

The Tecktonik, involving a lot of arm movements, is all the rage.

"I move my hands up in the right, in the left, put your hands up for Detroit, on every side," says patron Vlad Vladsy.

Others try to explain the dance in their own ways.

Jeremy Vachayeiu says it's sort of like you're an elastic band.

Fabien Amadeau says it's like a windmill. He says it's a mix of a lot of different dances – vogue-ing, hip hop, the moonwalk, smurfing — and the point is pure hedonism.

Any sort of accident or catastrophe could happen to our generation at any time, he says. So this dance is a way of living life to the fullest, in case we're not here tomorrow or two days from now, he adds.

Seven years ago, Tecktonik was limited to a few dance clubs in Paris. It moved into the mainstream about a year ago, when dancers started posting videos of themselves on DailyMotion and YouTube.

In one video explaining the dance, the dancer says "you need big sunglasses, a ridiculous haircut, a flashy belt and a tight T-shirt. And above all you must know how to move your body."

Now, the Tecktonik is also a fashion movement and a brand name. There's a Tecktonic brand T-shirt and a Tecktonik haircut — the official version of the mohawk-mullet cross costs $140. Soon there'll even be a Tecktonik brand mobile phone.

The dance also has moved onto the street. Here on the square at the Trocadero in Paris, dozens of dancers gather every Saturday afternoon to make up and share new moves.

Narcos Vidrine, 21, says he and his friends don't just dance for pleasure. They dance because they want to prove something, that they're better than others. But instead of fighting with fists, they fight with the dance.

And then there are the apprentices. Riot Jimere, 11, has been dancing since November. He says he really likes dancing, but that he gets exhausted if he dances too much.

Jimere and his friends can already be seen on the Internet.