Accessibility links
A Jewish Movement to Shroud the Female Form Followers of a spiritual leader in Israel believe in a strict interpretation of the Torah in which women cover themselves almost head to toe. Jerusalem-based reporter Sheera Frenkel says the look is similar to the burqa some women wear in Afghanistan.

Listen
A Jewish Movement to Shroud the Female Form

How modest is too modest? 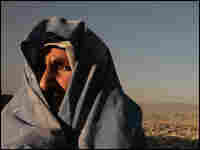 In Israel, female followers of a strict rabbinical sect are covering themselves from head to toe, much like this woman in Afghanistan, where many wear a full-length shroud called a burqa. Paula Bronstein/Getty Images hide caption

Followers of a spiritual leader in Beit Shemesh, Israel, believe in a strict interpretation of the Torah in which women cover themselves head to toe. Jerusalem-based reporter Sheera Frenkel, who writes for The Times of London, says the look is similar to the burqa many women wear in Afghanistan.

Converts wearing the so-called Jewish burqa, or sal, Frenkel says, are attracting attention in a Jerusalem suburb known for educated, affluent commuters. Frenkel says the movement centers largely in a village outside the town's center, where extremely devout converts from the United States and England have settled. Followers also dot Jerusalem and outposts on the West Bank.

"It's an incredibly warm place," Frenkel says, explaining how unusual the heavy clothing is in Israel. "Here's a woman wearing six layers of clothing."

Frenkel says locals tend to assume that the covered women aren't Jewish. "People think they're Arab women," she explains, noting that they are circulating in areas where strong feelings prevail about the Arab Muslim coverings for women.

Frenkel says that approximately 100 women currently follow the teachings of Keren, the female religious leader who says covering women was originally a Jewish tradition. Keren claims to have seen an image from 400 years ago of Jewish women covered from head to toe, but Frenkel says experts believe there are no historical references to back up her claims. Frenkel also says Keren is not in any way ordained, a circumstance that has drawn ire from area rabbis.

But the women's husbands and relatives are perhaps the most unhappy with the movement. Some men, Frankel says, accuse the covered women of being immodest, because they draw more attention to themselves with their unusual dress.

In Israel, Frenkel says, "modesty is blending in, not drawing attention to yourself."