Accessibility links
Jack Bauer: Quiet, Ruthless Defender Of America On TV's 24, he's focused and fearless when it comes to defending his country from terrorist attacks. Is he a hero? A rogue? And do fans think — or hope — there's a real Jack Bauer out there? 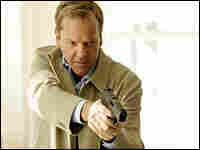 Man On A Mission: Kiefer Sutherland's Jack Bauer does the necessary, no matter how it hurts. Kelsey McNeal/Fox hide caption

Hero? Hothead? You Be The Judge: The 'In Character' Blog 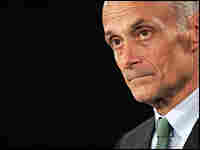 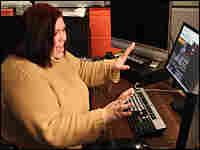 'More Lives than a Cat'

'Please Hold for the President'

We've always had fictional heroes who can singlehandedly save us from the bad guys — the Lone Ranger, Zorro, Superman. But those characters were so 20th-century.

The 21st century has its own fictional hero, a ruthless counterterrorism agent forced to fight the clock to protect the nation. And Jack Bauer, hero of the Fox network's 24, has fans from across the political spectrum.

What is it about him that's so appealing? He's always yelling. ("Dammit, Chloe, just do it now!") Or torturing people — including his own brother, who admittedly was a bad guy.

People say they admire Jack Bauer because of one thing: He's committed to saving the United States from attack. And he's willing to risk everything — his life, those he loves, the Constitution — to succeed.

One pop-culture expert says Bauer's appeal is easy to explain.

"In a world in which we think that so much is out of control," says Robert Thompson, "it is incredibly satisfying to watch a human being who's so completely in control."

Thompson teaches television and culture at Syracuse University, so he has to watch TV for a living. But he says he looks forward to the vicarious thrill he gets watching Jack Bauer cut down the bad guys.

Thompson thinks Bauer is the quintessential hero for a post-9/11 world, an escape valve for a sometimes frustrated nation.

"If in real life in the war on terror, we are not going to be able to kick the enemies' butts in noticeable ways," Thompson says, "then we are going to demand to see the enemy's butt kicked in our fiction."

For A Troubled Time, A Flawed And Troubled Hero

24 premiered just two months after Sept. 11, but Jack Bauer's character was created before the attacks. Bob Cochran, the show's executive producer, says it was always the plan that Bauer, played by Kiefer Sutherland, would be the type who would slice through the bureaucracy to do what has to be done.

"The notion that was on our minds was, Here's a guy who, although he's flawed and makes mistakes, he's uncompromising," Cochran says.

And Jack Bauer makes that clear in the first episode, as he directs his chief of staff, Nina Myers, to check out a suspicious superior: "Nina," he says, "you can look the other way once, and it's no big deal. Except it makes it easier for you to compromise the next time, and pretty soon that's all you're doing is compromising, because you think that's how things are done."

Cochran was thinking good drama — that Jack Bauer's stubbornness against the backdrop of an impending attack would make for interesting TV. And it does.

But it's also helped sharpen a real-life political debate. 24 has both liberal and conservative fans, including top members of the Bush administration — Vice President Dick Cheney and Homeland Security Secretary Michael Chertoff, to name two.

Chertoff says he sees parallels between the difficult choices Jack Bauer has to make and the real fight against the terrorist threat.

"He knows sometimes there's only bad choices, and you've got to make the least bad choice," Chertoff says. "And ... he does it, and he takes responsibility for it. And I think that's in many ways something that the public values, and frankly something that I think is great aspiration."

In Fact And In Fiction, '24' Makes Itself Felt

"But it doesn't mean you agree with everything you enjoy," Steinhardt says. "This is pure escapist entertainment."

Steinhardt is a top official with the American Civil Liberties Union, and in the real world he has challenged many of the difficult choices Chertoff has made. But like Chertoff, he's a huge 24 fan. Steinhardt says the show reminds him of the cowboy movies his grandmother took him to when he was 5, when the hero would rush in at the end and save the day.

"But the difference between being 5 and 55 is that, at 55, hopefully you learn that the lone-cowboy mode doesn't work," Steinhardt says. "It doesn't ... protect us, and it certainly doesn't protect our civil liberties."

Take torture, for instance. Steinhardt points out that when Jack Bauer does it, it always seems to work.

How seriously should one take Jack Bauer? The dean of the military academy at West Point was concerned that some cadets took him too seriously — concerned enough that he visited the producers of 24 in late 2006. He asked if they could tone it down a little, if they could make Jack Bauer's violent tactics not quite so effective.

Cochran says the show's producers took the comments under advisement, but that little has really changed. It is, after all, just a TV show, he says.

"I think the Army is responsible for training its own people," Cochran says. "We're not. And they should be able to explain the difference to their own people between fantasy and reality."

And, Cochran says, it's not like Jack Bauer isn't bearing a cost for his actions — a cost that creates the kind of tragic story line that keeps an audience engaged.

"What happened over time was Jack Bauer found himself paying a higher and higher price in his personal life for doing the things that needed to be done in his professional life," Cochran explains.

The show's fictional secretary of defense tells Bauer to stay away from his daughter — that Bauer is "cursed," that everything he touches, "one way or another, ends up dead."

Over six seasons, in fact, Bauer has lost just about everyone he was close to. His wife was murdered. He is estranged from his daughter. He even killed his longtime buddy Curtis, to stop him from derailing a mission.

And Stephanie Romanski loves every minute of it.

Romanski lives in Grand Island, Neb., and runs 24addict.com, one of the many, many fan sites devoted to Jack Bauer and 24. The home page has a picture of Bauer, holding a gun, looking off into the distance with a steely glint in his eyes. As if, Romanski says, he's ready to save the world — again.

I asked if the thousands of people who visit Romanski's site seem bothered that we don't really have a Jack Bauer to save the day. Her response? "Who's to say that we don't?"

And so, clearly, do many others.