Accessibility links
Antarctica's Sea 'Babies' in Limbo The icy ocean around Antarctica is one of the most unspoiled in the world. It's world-renowned for its penguins, but one team of scientists is more concerned about the animals you can't see — and the fate these microscopic creatures may face in a warming world. 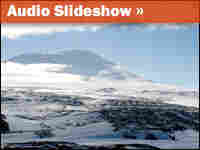 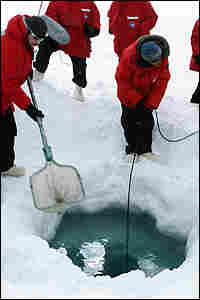 The researchers lower a canister into McMurdo Sound to collect samples of larvae. They're studying how these tiny animals will respond to warming seas. Peter Breslow, NPR hide caption 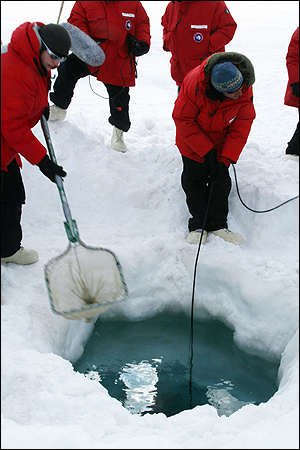 The researchers lower a canister into McMurdo Sound to collect samples of larvae. They're studying how these tiny animals will respond to warming seas. 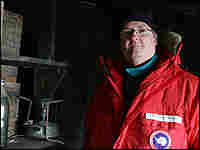 Donal Manahan is a marine biologist who has been studying life in Antarctica's oceans for 25 years. Peter Breslow, NPR hide caption 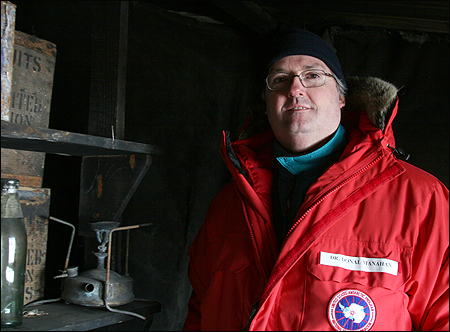 Donal Manahan is a marine biologist who has been studying life in Antarctica's oceans for 25 years.

Donal Manahan and his research team are lining up their snowmobiles like hot rods before the race. We're standing at the edge of the sea called McMurdo Sound along Antarctica's eastern coast. Actually, we're standing on top of McMurdo Sound.

Manahan is a marine biologist at the University of Southern California, and was just named director of its prestigious Wrigley Institute for Environmental Studies. He's leading this expedition of 20 young PhDs who've come to work with him from around the world. They're all wearing the same uniform — bright red parkas lined with fur. It's about 10 below zero with the wind chill. When they get to their research area, they're going to take water samples so they can study life in the sea.

"We want to understand the transitions that happen under the ice in Antarctica, because there's all of these changes going on with the melting ice," Manahan explains. "We want to see what effect that has on the organisms that live here."

Scientists often get stereotyped as cautious and dull. But when these guys get on their Ski-Doos, they're a little nuts.

With a revving of engines, the squad of snowmobiles takes off. Manahan leads the pack, racing across the ice at 50 miles an hour. My driver takes a ridge like they do in a James Bond movie, and we go flying through the air. We're racing through a spectacular white canvas of sea, land and mountains. Everything is blinding white.

We get to the research site in about 30 minutes, and Manahan's PhDs grab shovels and axes off a sled. A few weeks earlier they dug a hole here which went six feet down to the sea. But since then, the hole has been healing itself, like an icy white scar. So the team is hacking away at the ice to re-open it.

But the work is frequently interrupted by visitors — Weddell seals who poke their noses up to get a breath of air. Each seal weighs about 1,000 pounds. Manahan's team is used to the seals' habit of dropping by unannounced.

"If you look around, there's very few places for them to get a breath of air," Manahan's colleague, Deneb Karentz, explains. "So whenever we drill a hole, they kind of take it over."

Every researcher knows the guidelines — under the international Antarctic treaty, nobody can interfere with wildlife. Scientists say if the animals merely pause what they're doing to look at them, they're too close.

Suddenly, almost on cue, a shiny black nose pokes just above the water. The seal's nostrils open and close like rubber flaps. It breathes in and out several forceful wheezes of air that sound like a whale spouting.

"Typically, they will do 15-minute dives and then they will come up and breathe heavily... and then of course you'll hear the breathing tail off as they oxygenate," Manahan explains. "As soon as they're ready to go, whomp, down for another 15-minute dive."

The team always stops digging when a seal surfaces. It's the law — but Manahan also seems to feel sympathy for the seals. There are only a couple of breathing holes within miles, he says, and keeping the ice from closing over the holes is a full-time job.

"One of the things these seals have to do is continually keep their ice holes open, so they're grinding their teeth all the time, keeping the ice holes open so they can breathe," Manahan says.

After a couple minutes, this seal takes one more breath for good measure — and bloop, he's gone.

Donal Manahan grew up in Ireland. He says when he was a boy he dreamed of going on adventures. So he became a marine biologist partly to take him there. Manahan doesn't look like a guy who takes risks. He's a little doughy, and he wears glasses that seem bookish. But he went scuba diving 100 feet deep in the Caribbean to study sea urchins. He dove almost two miles deep in a mini sub to study tubeworms at the bottom of the Pacific Ocean. And he's gone scuba diving right here, under the ice.

Manahan has been studying life at the bottom of the world for 25 years. The first time you come to Antarctica, he says, it might seem lifeless. "Where we're standing now, you might first guess there's no life between me and those mountains that are 80 miles away. But as soon as you dig into this ice, it's teeming with life," he says.

Manahan says this is the perfect place to study how sea life is affected when the environment starts to change, because it's probably the most unspoiled ocean on the planet.

When he first went diving in this water, Manahan says his heart was in his throat. The water is barely 29 degrees.

But the view underwater is otherworldly. You can see for 1000 feet, which is "even better than the Caribbean," Manahan says. "You come down this hole and... it's really like something out of a movie. You see this shaft of light like a UFO landing... just blasting through the hole and coming down to the bottom of the ocean. And all around you is this beautiful blue ice. It looks like diving under clouds," he says.

Manahan and his colleagues have been studying the teeny babies that live in this sea — the microscopic larvae of fish, worms and sea urchins. To catch them, they drop a metal canister through the hole. As the canister sinks, it collects water at specific depths.

The researchers will take these samples back to their lab and run all kinds of tests. One experiment they've done, heating the seawater to mimic warming seas, has already produced some troubling results. Warming the water only one or two degrees causes the larvae's metabolism to go out of whack.

"Let's use a human analogy — if I heat up my body temperature by a couple of degrees, it's called a fever," Manahan says. "And once it gets beyond a few degrees, I go into a coma."

But climate change is going to reshuffle life on the planet in complicated ways. It's not going to hurt everything or everybody. For instance, parts of western Antarctica are warming faster than any other place on the planet. But eastern Antarctica is still cold, and some parts are getting colder. Some kinds of penguins are doing great; others are practically dying out.

And as for Manahan's babies in this sea: So far, the water temperature hasn't changed, and the researchers haven't seen signs that the larvae are suffering. But it's a different story in the North Atlantic, where the water temperature has gone up a tiny amount. British scientists have found that, sure enough, the babies' ecosystem there has already gone out of whack.

Manahan says scientists around the world are holding their breath. They're wondering where they will see the next big changes.

"There will be losers and there will be winners," Manahan says. "The big issue, to me, is is human civilization going to be on the losing side?"

Manahan says what happens here in Antarctica will give us clues as to how it's all going to play out. Think about the history of civilization: Humans as we know them have been around for about 250,000 years. But they started building cultures and cities only in the past 10,000 or 12,000 years. Civilization took off partly because the Earth's climate finally became relatively stable, Manahan says.

It may be that an instable climate will make the Earth return to looking a lot like it did 20,000 years ago, he says. But that doesn't mean we can cope with it.

"People say, 'Oh, okay, that's happened before.' Well, sure it has," Manahan says. "But we didn't have six or eight billion people on planet Earth to support back then. So that's my big concern... we can basically ruin modern civilization as we know it."

Now the wind is howling and the cold is biting through the parkas. Manahan's team packs up.

They'll be back to take more water samples in a few days. But right now, Manahan's thinking about more urgent needs: dinner.

"I never enjoyed food more in my life than I have working in Antarctica," Manahan laughs. "When you go back, you feel like you deserve an extra plate of hot pasta."