Accessibility links
U.S. Launches Aggressive Training for Afghan Police Building a competent, national police force is a top priority in Afghanistan, where the public's sense of security is rapidly eroding amid growing terrorism and crime. But an ambitious training plan is stretching already limited resources. 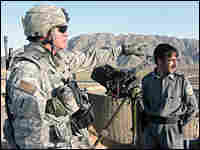 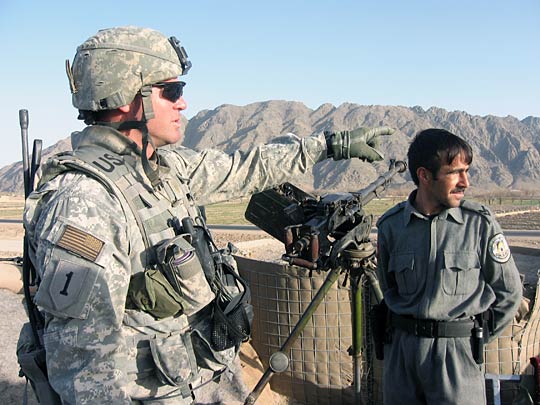 The U.S. military has launched a plan to dramatically improve Afghanistan's national police force, amid persistent concerns over growing terrorism and crime.

At Patrol Base Wilson, in Kandahar province's volatile Zhari district, American and Canadian military trainers are trying accomplish a top-priority task, something many Afghans believe can't be done: create a police force that will maintain law and order in a country where few feel safe anymore.

Many of the thousands of police officers across the country are recruited off the streets; many lack training, equipment and even uniforms. Low pay has led to widespread corruption among the ranks and shakedowns of the people they are supposed to serve.

Officers aren't trained to be beat cops, much less to fight insurgents, say U.S. military and local Afghans. Many smoke hashish. Some demand illegal "taxes" from drivers on nearby roads. Often, the local police force is more of a militia answering to the local strongmen.

This is not the national police that U.S. Maj. Gen. Robert Cone envisions for Afghanistan. He is heading up the U.S. training program, which launched this year. It ensures pay parity for police officers who meet acceptable standards, so they don't earn less than Afghan army privates

The limited but aggressive program focuses on some of the country's most dangerous districts in Kandahar and Helmand provinces.

"I think there are a number of districts … that frankly are the heart of Taliban country where we think it's particularly important after we've done clearing operations that we have a police force that can come in and earn the trust of the Afghan people and provide them with at least a first line of defense and security," Cone says.

The program, called "Focused District Development," targets police officers in areas key to commerce and security, mainly in the south and east. Officers in these districts are being sent to regional training centers staffed by Western military personnel and by police officers hired by U.S. security firm DynCorp. There, the Afghan policemen train for eight weeks.

At the regional training center near Kandahar city, it's clear the national police have a long way to go.

Even so, one of their American trainers, Army Spc. Andrew Shook, is confident the current class will eventually become effective police officers.

He says the main issue with training the Afghans involves refining the role they are expected to play. The U.S. State Department envisions the Afghan officers as taking on a traditional police role, while the Department of Defense wants them to be more of a paramilitary force, Shook says.

"We are trying to find a balance," he says.

Finding adequate resources is another issue. Maj. Gen. Cone admits he's stretched thin and that there are simply not enough U.S. military trainers to transform the police quickly.

"It will take time to determine if these young Afghan policemen can represent the face of the Afghan government to a satisfactory way," Cone says, "and again, it's in the eyes of the people, so we will see."

He estimates it will take years to train all of Afghanistan's police. The U.S. Army officers involved in the training here say it will take a generation.