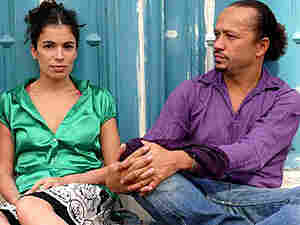 The latest Apple commercial features an ultra-thin laptop and a fresh hit song, "New Soul." Steve Jobs hand-picked the song for the launch of the new MacBook. "New Soul" is from Israeli singer/songwriter Yael Naim's just-released self-titled album, and the song has jumped to the top of the Billboard charts, making Naim the first Israeli solo artist to have a Top 10 hit in the U.S.

Naim says that she was surprised to see how the song was used in the ad, but thought it was fitting for it to be used in a computer commercial: "Today, computers help us making the music," she says. "It's really a tool."

"New Soul" is about self-reflection. She says she was inspired to write it after a conversation with a friend about reincarnation. "I thought I was an old soul, and that I knew life, but then starting the real life I figured I am completely new," Naim says. "I mean, everything was a mess and I did a lot of mistakes. So it was just looking back and say, 'Okay, let's start again, it's okay.'"

"Paris" is the first song Naim ever wrote in Hebrew. She wrote it after she'd moved to the French capital. Even though she was at a high point in her career, she felt that she had left her home in Israel too soon.

Naim spent two years in Paris working with percussionist David Donatien to craft the rest of her album, which is written in English, French, and Hebrew. When asked which language feels most comfortable for her, she says one isn't better than the others; they're just different. "English is really free for me; there's no limits to the music and the imagination," she says. "And French, it's just I live in Paris, and it's really a poetic language where you can really play with words. Hebrew is my first language, so it's really the most personal and the most simple. When I write in Hebrew, I don't look for sophistication in music; it's just pure emotion that comes out."