Accessibility links
Obama Holds Forth on Race, Answering Critics Presidential hopeful Sen. Barack Obama called for an end to racially charged politics in a speech in which Obama sought to distance himself from controversial sermons by his longtime pastor. Race has become a focus of the Democratic campaign, in which Sen. Hillary Clinton hopes to win a series of crucial primaries that could determine the nomination. 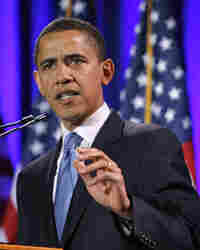 Sen. Barack Obama (D-IL) speaks in Philadelphia, Pa., where he condemned "profoundly distorted" sermons by his former pastor, but refused to disown the fiery religious leader. Obama is campaigning throughout Pennsylvania, which holds its primary on April 22. hide caption 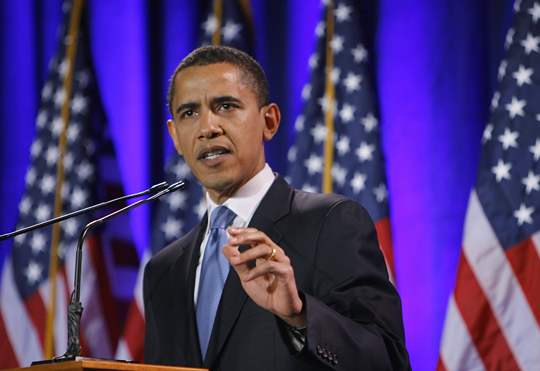 Sen. Barack Obama (D-IL) speaks in Philadelphia, Pa., where he condemned "profoundly distorted" sermons by his former pastor, but refused to disown the fiery religious leader. Obama is campaigning throughout Pennsylvania, which holds its primary on April 22.

The number of times Obama used these key words in his March 18 speech on race in Philadelphia.

Rev. Jeremiah Wright's comments from 2003 on African-Americans and on how the United States "treats its citizens as less than human."

Democratic presidential hopeful Barack Obama on Tuesday called for an end to racially charged politics, distancing himself from controversial sermons by his longtime pastor, but said he would not disown the man who had brought him to Christianity.

Speaking at the National Constitution Center museum in Philadelphia, the Illinois senator called comments by the Rev. Jeremiah Wright, who recently retired from Chicago's Trinity United Church of Christ after 20 years at the pulpit, "incendiary" and "divisive."

Among other things, Wright had suggested that the Sept. 11, 2001, terrorist attacks were divine retribution for white Americans' mistreatment of blacks.

Wright's statements "expressed a profoundly distorted view of this country — a view that sees white racism as endemic, and that elevates what is wrong with America above all that we know is right with America," Obama said.

Race has increasingly tainted the Democratic campaign in recent weeks.

Former vice-presidential nominee Geraldine Ferraro stepped down from her role in Sen. Hillary Clinton's campaign last week after she suggested that Obama would not be in contention for the Democratic presidential nomination if he were a white man. Following Ferraro's remark, Obama called on Clinton to stop perpetrating "the same divisive politics that has done us so much damage."

In his address on Tuesday, Obama admitted that despite his denunciation of Wright's remarks, many people would still have "nagging questions."

"Did I know him to be an occasionally fierce critic of American domestic and foreign policy? Of course. Did I ever hear him make remarks that could be considered controversial while I sat in church? Yes. Did I strongly disagree with many of his political views? Absolutely," he said.

But Obama declined to disown the man who baptized his children and officiated at his wedding.

"I confess that if all that I knew of Rev. Wright were the snippets of those sermons that have run in an endless loop on the television and YouTube ... there is no doubt that I would react in much the same way" as his critics, he said.

Obama said he understood the passions on both sides in "a racial stalemate we've been stuck in for years."

"We can play Rev. Wright's sermons on every channel, every day, and talk about them from now until the election, and make the only question in this campaign whether or not the American people think that I somehow believe or sympathize with his most offensive words," he cautioned.