Accessibility links
Gen. Petraeus Defines Victory in Iraq On the fifth anniversary of the U.S.-led invasion of Iraq, the top military commander in Iraq shares his thoughts on the future of the country. There has been progress, he says, but it's "tenuous" and "reversible." 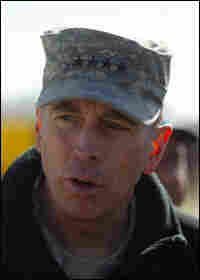 Gen. David Petraeus says that attacks are down 60 percent, but overall progress is "tenuous" and "reversible." Ali Yussef/Getty hide caption

As the fifth anniversary of the U.S. led invasion of Iraq is marked this week, Gen. David Petraeus, the top military commander in Iraq, says that attacks are down 60 percent, but progress is "tenuous" and "reversible."

In a discussion on the future of the country with Alex Chadwick, he defines victory as "an Iraq that is at peace with itself, at peace with its neighbors, that has a government that is representative of — and responsive to — its citizenry and is a contributing member of the global community."

Prospects for such an Iraq are better than they were a year ago, during the height of sectarian violence, he says.

"There is a degree of hope in the Iraqi population that probably was not present back at that time," he says, adding that, ultimately, success depends on "progress in the security arena, providing basic services to the Iraqi people, the Iraqi government getting their ministries functioning in a way that they are not right now, and getting the economy overall growing so that it can employ what is a fairly substantial unemployed and underemployed population."