Accessibility links
Military Moms Face Tough Choices Mothers who serve in the Army are required to leave for war as early as four months after their babies are born. Some lawmakers and military officials say the Pentagon should expand maternity benefits as a way of keeping the best recruits. 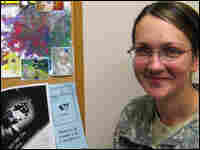 Sgt. 1st Class Jennifer Williams says she likes to deploy with reminders of her daughter, Reilly. Williams is standing next to a painting and photos that she kept on the wall during her year in Korea. Brian Mann/NPR hide caption 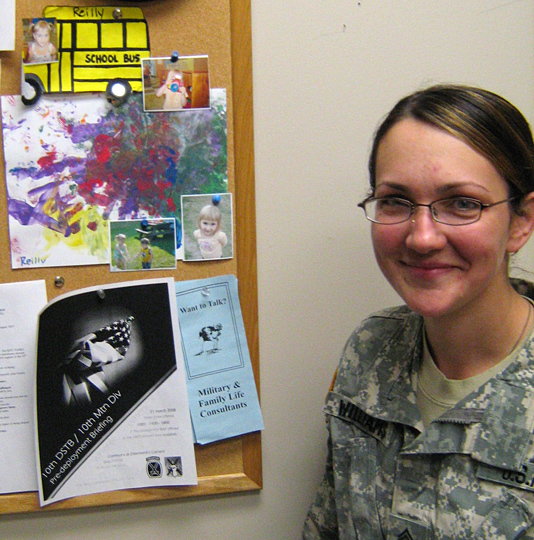 Sgt. 1st Class Jennifer Williams says she likes to deploy with reminders of her daughter, Reilly. Williams is standing next to a painting and photos that she kept on the wall during her year in Korea.

Jennifer Williams on heading overseas and leaving her daughter back home.

All branches of the military give servicewomen six weeks of maternity leave before they have to go back to work. But what happens to women who give birth just before their units are deployed to a combat zone? How much time should a mother be allowed with her newborn before she is required to return to deployment? When it comes to deployment deferments, the different military services have different answers.

Many military parents are on their second or even third deployments to Iraq and Afghanistan. For many, that means painful choices between family and duty.

The dilemma is especially stark for servicewomen with newborn babies or very young children. All branches of the military give new mothers six weeks of maternity leave before they have to go back to work. But if they're headed into a war zone, mothers are required to deploy as early as four months after their babies are born, depending on which branch of the military they serve.

Some lawmakers — and some military officials — say the Pentagon should expand maternity benefits as a way of keeping the best recruits.

Women now make up roughly 15 percent of the armed services. According to a 2002 report by the Government Accountability Office, as many as 1 in 10 active-duty women become pregnant every year.

Women can take a voluntary discharge and leave behind their military careers.

"I grew up with a mom that stayed at home every day. That's the way I always pictured myself. So, it was a lot for me not to call it quits and to get out," Shaw says.

Shaw stayed in, knowing she would have to go to Iraq. She and her husband — also a soldier — deployed at the same time, leaving behind their 4-month-old son, Connor James. Shaw estimates that she has spent about 4 1/2 months with Connor since he was born.

"He probably doesn't remember his mom and dad," she says.

Shaw's son lived with his grandmother while his parents were deployed.

Shaw, who just returned home to Fort Riley, Kan., says she went to Iraq because she felt a sense of duty, but she's not sure she would make the same choice again.

"You do miss all the firsts — like him walking and talking and getting teeth and things like that that most parents actually enjoy seeing," she says.

Jessica Perdew with the National Military Families Association says the Pentagon has to find ways to help military moms if it hopes to keep them in uniform.

"Women that are in the military now are serving in billets and in areas that are absolutely critical," Perdew says.

Perdew had a baby when she was a Marine during the Persian Gulf War.

She argues that new moms should be allowed to work at bases stateside for at least 12 months after giving birth.

"And that's based on everything the American Academy of Pediatrics is telling us about breast-feeding and how important that is," according to Perdew.

For many women, the conflict between soldiering and motherhood extends well beyond that first year. Repeat deployments are forcing them to make complicated decisions about when or whether to have children.

"I call it my great balancing act," says Jennifer Williams, a first sergeant with the 10th Mountain Division, based in northern New York.

Just 11 months ago, Williams returned from a deployment to South Korea.

Now she's again leaving her husband and her 3-year-old daughter, Reilly — this time for a 15-month tour in Iraq.

"When I first came back from Korea, I had wanted to have a second child. And my husband said, 'You need to know your deployment schedule first, because I can't be home with a newborn and a toddler — I'm sorry, I can't do both at the same time,' " Williams says.

Williams uses the telephone as well as videos and a Web cam to keep in touch with Reilly. But she says the first long separation was confusing and frightening for her daughter.

"When I came home, she seemed to be in shock. She ran to me, but she just kept staring at me like she couldn't believe it. And [she] kept looking at everyone like, 'She's supposed to be in the computer.' "

Army officials say they are trying to help military moms. They've promised to cut deployment times for all soldiers, from 15 months down to a year.

When Army Secretary Peter Geren appeared before the Senate Armed Services Committee last February, he faced questions about body armor and budgets. And lawmakers also pressed him for answers about babies.

"New mothers are facing a continued difficult decision between motherhood and their service to their country," said Sen. Ben Nelson (D-NE). The lawmaker questioned Geren about the Army's policy of deploying female soldiers to Iraq just six weeks after they give birth.

"Clearly that has to be reviewed because it's got to have some impact on people deciding whether to get in or stay in, if they have to get an extended deferment in order to have a family," Nelson said.

Geren told the Senate Armed Services Committee that he hopes to give new mothers slightly longer deferments after giving birth — allowing six months before overseas deployments instead of four.

"We have tasked the Army staff to examine that policy and examine the impact of a change in that policy," Geren says.

Williams says that as the wars in Iraq and Afghanistan continue, military women have developed an unofficial support network, swapping tips for helping their young children.

For example, some women have suggested she regularly wear a specific perfume or scented lotion "so that they connect that smell with you."

"And if you leave it at home, when they get really lonesome, they smell it and it makes them feel better," she says.

Then Williams brings up the unthinkable: If something happens in Iraq and she doesn't make it home, she says that fragrance will leave her little girl Reilly with a tangible memory of her mom.