Accessibility links
Sports in America Increasingly Becoming Child's Play The World Figure Skating Championships are under way in Sweden, but the U.S. women's champion is not competing. She's too young. Frank Deford says it's another sign of the times in American sports. 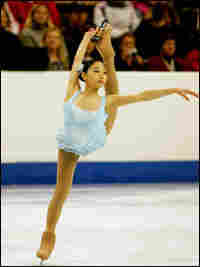 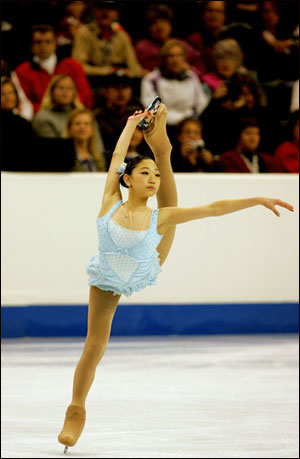 The world figure skating championships are under way in Sweden, but the top U.S. woman is not competing. She is Mirai Nagasu, who is 4-feet-11-inches tall and, if you can believe this, all of 78 pounds. Nagasu is also a mere 14 years old, which is too young to qualify for the worlds.

What sense does it make to ban her? After all, she proved in legitimate competition to be the best figure skater we have, so what does her age matter? Besides, like it or not, she's part of the trend in American sport for athletes to be more accomplished at a younger age, as more attention is devoted to children's competition.

Kids are better than ever at sports. They mature earlier physically, they have more sophisticated coaching, and they learn to copy advanced skills by studying the best athletes on television. Abetted by adults, who seldom have the children's best interests at heart, they are encouraged to dedicate their young lives to sport — often to the general exclusion of school and a normal childhood.

The national sporting press has encouraged an emphasis on high school sports by giving young athletes a national stage. Seizing on our mania for polls, USA Today led the way when it began publishing the national rankings of high school teams, and the likes of ESPN and Sports Illustrated have joined in. McDonald's chooses All-America teams, making national celebrities of these kids.

We have always had a passion for high school sports. It's no different from why we Americans alone emphasize college sports. Athletics gives glamour and identity to a college or to a town's school.

But what has changed is that it's a national show now. Isn't it enough for a team to win the county championship, a kid to make all-city? No longer. Now school teams travel the land, modern day vaudevillians, playing one-night stands that are hundreds and even thousands of miles away from home. There are all sorts of national post-season all-star games, even high school football bowl games.

Not everybody is happy with this development. In particular, women's figure skating, which was once the most popular female sport on TV, has plummeted in the ratings as the tiny teens have taken over the sport, jumping about the ice but unable to display the grown-up grace and elegance once displayed by Peggy Fleming, Dorothy Hamill and Kristi Yamaguchi. And from a more substantive point of view, at a time when educators are struggling to keep American boys in school and interest them in college, where young women now predominate, the increased glorification of school sport is surely counterproductive to education for boys.

The irony is that for so long so many Americans have decried the emphasis on college sport. Instead of that being remedied, the very sins of college athletics are now being passed down to high school.