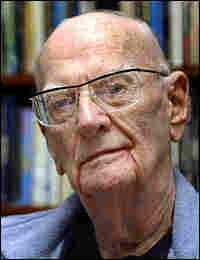 British science fiction novelist Arthur C. Clarke died Tuesday in Sri Lanka, where he lived for more than 50 years. He was 90 years old.

Having written some 100 books, Clarke is perhaps best known for 2001: A Space Odyssey. He also co-wrote the screenplay for the film directed by Stanley Kubric.

In December, Clarke recorded a message to his friends and fans, whom he said were asking him "how it feels to have completed 90 orbits around the sun." He said he had no regrets.

Clarke suffered from post-polio syndrome. In the video he said, "being completely wheelchaired doesn't stop my mind from roaming the universe."

And he said he had three wishes: evidence of extra-terrestrial life, an end to our addiction to oil and an end to the bitter conflict in Sri Lanka.