Accessibility links
Students Make a Case for Carrying Guns to School After shootings on college campuses in Illinois and Virginia, 12 states are considering measures to let students carry guns. Stephen Feltoon is part of a movement that says college students should have the same gun rights as others.

Listen
Students Make a Case for Carrying Guns to School 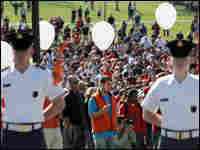 After deadly shootings at schools in Illinois and Virginia, 12 states are considering legislation to allow guns on college campuses. Stephen Feltoon, a director for Students for Concealed Carry on Campus (SCCC), is part of a movement that says college students should have the same gun ownership rights as others.

Feltoon says he purchased his first gun for recreation. "Now I own it for defense," he says. "I can take a firearm anywhere that's not a college campus, a liquor establishment, or any business that posts a 'no gun' sign. When am I carrying it? That's the beauty of conceal and carry. You'll never know until I need it."

He says SCCC started a day after the Virginia Tech shootings and that when he first learned of the group, he signed on immediately. "I believed that my right to self-defense was being infringed on college campuses," he says. "College campuses are vulnerable and I didn't want to be defenseless."

Feltoon says Virginia Tech is home to the SCCC's largest group of conceal and carry advocates. As for the SCCC's total enrollment, Feltoon says it has doubled in the last month, bringing the total to 22,000 members just one year after its founding.

"The Illinois shooting made people realize college campuses aren't as safe as administrators would have them believe," Feltoon says, explaining the recent jump in members.

Feltoon says the group's core mission is simple: "We're pushing universities to allow law-abiding citizen to carry guns on college campuses, just as you would into malls and movie theaters."

Feltoon says most SCCC members are men and women over 21 years old who already have licenses to carry a gun. "We're just asking for them to carry guns to one more location," he says.

Beginning on April 21, Feltoon says, 3,000 SCCC members have pledged to visit college campuses wearing an empty holster to indicate that, because of state or school policy, when they reach campus, they're obliged — for now — to leave their guns behind.