Accessibility links
Antarctica's March of the Tourists An unprecedented 40,000 people will visit Antarctica this year. For many, reaching the icy continent represents a great personal achievement — but waves of tourists could potentially do more damage there than climate change.

Listen
Antarctica's March of the Tourists 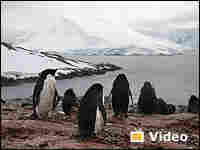 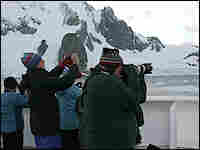 An unprecedented 40,000 people will visit Antarctica this year. Some researchers worry that waves of tourists could damage the world's most unspoiled continent. Jessica Goldstein, NPR hide caption 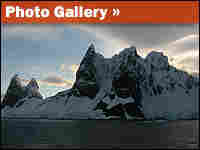 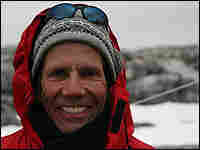 Researcher Steve Forrest has been traveling to Antarctica every summer for 13 years. He says penguin numbers on the continent are falling. Jessica Goldstein, NPR hide caption

When the American explorer Richard E. Byrd sat alone in his hut in Antarctica in 1934, half frozen and half poisoned with carbon monoxide, he had an epiphany. Byrd wrote that he and other men of action in the exploration of the poles were risking their lives for no good reason. Byrd survived the ordeal, but his near-death experience diminished him.

Mary Naus says her near-death experience made her bold. And that is why she's standing on Antarctica today.

"In 1999, I was diagnosed with breast cancer and I had a stage one disease that required bilateral mastectomies, chemotherapy. It seemed as if it went on forever, and I had a lot of time to reflect," Naus says. "And I thought ... I'm going to change the way I do things. I'm not going to say no when people ask me to go on trips, I'm going to say yes! And I'm going to try to see the world."

Naus teaches clinical psychology at the University of Houston. She is one of more than 200 men and women of action who are visiting Antarctica for the first time. Whether their epiphany comes before they arrive or after they've gotten here is somehow immaterial. They are transformed.

"Antarctica represents to me a very special event, because my 60th birthday was last month and this is my seventh continent and I feel like I've accomplished my goal," Naus says with a smile.

For serious travelers, to reach all seven continents is to achieve a kind of personal best. Antarctic travel is not as rough as it used to be, but it's not smooth either. Like the rest of the people here, Naus flew down to Tierra del Fuego to meet a Norwegian ocean liner. She sailed more than 40 hours across some of the world's most troubled waters. And now, she's storming the gravelly beaches of a place called Jugular Point, on the northernmost tip of the world's southernmost continent.

The cruise ship is following a filigreed course around the small islands along the Peninsula. Where the ice pack allows, the ship stops, we pile onto motorboats and head ashore. Where the ice is too thick along the coastline, we stand on the ship's deck and admire. But it's more fun stumbling across black rocks and blue-veined glaciers and seeing the ubiquitous little fellas that greet us on land: the penguins.

Antarctica's outer edges are home to a small variety of birds and whales and seals, but the penguins rule in sheer number. You don't even have to look for them — just follow your nose.

"When you first bring the boat up and they stop, you're just hit with this wall of awful smell from the penguin poo," laughs Michelle Globus, a business developer from Princeton, N.J.

Apart from the smell, this place is fabulous. The North Pole is all ice, but Antarctica is rare earth indeed. On the Lemaire Channel, black frost-dusted mountains rise above the heavy ice water like the fists of Zeus. White glaciers reveal veins the color of blue topaz. And the light is so puckish that the silver horizon — hundreds of miles away — looks like you can hold out your hand and touch it.

But there are rules of engagement in Antarctica. The tour operators say you've got to keep your hands to yourself. The continent's delicate wildlife depends on human restraint.

With all the people coming to the continent, researcher Steve Forrest says, it has to be affecting Antarctica's ecology.

"On some days we may see 600 people here on this island in a day," says Forrest, who works with Oceanites/WWF. Forrest has been traveling back and forth between Bozeman, Mont., and Petermann Island every summer for the past 13 years.

Last year, a cruise ship carrying thousands of gallons of fuel apparently hit an iceberg and sank. And even we, the penguin paparazzi, can't be trusted. The International Association of Antarctica Tour Operators (IAATO) is a nonprofit organization that works closely with the cruise ships to implement basic management procedures for all tourists traveling to Antarctica. Everyone who sets foot on the continent must abide by strict regulations — most importantly, to leave no trace of your visit.

But despite stern warnings from the cruise line, one or two people on our ship slipped pebbles into their pockets to take home. In any case, the human hand is altering Antarctica.

"Antarctica for me is like the white Amazon," says Ary Perez, a designer from Sao Paolo, Brazil. He's drawn to Antarctica to see its natural perfection. "It's almost us and the snow and the seals. It's a kind of paradise."

Caught by the Ice

And here's the rub. That very sentiment makes it hard for people to let this frozen treasure be. Rick Atkinson is a manager at Port Lockroy Station on nearby Goudier Island. He had his own epiphany in the Antarctic, which led him to help refurbish an old British base which now boasts the only post office for miles. Atkinson has seen plenty of tourists fall in love with this place. He says it's a particular kind of transformation.

"Caught by the ice," Atkinson says. "That lovely expression I heard from a captain one time as somebody was climbing onto the ship. 'Watch out for the ice!' — and the guy thought he meant don't slip on the ice on the gangway, but what he meant was that the ice all around about you in the Antarctic would get you. And once you've been here and been got by the ice, you'd just want to keep coming back to it."

To most of the world's population, Antarctica is still an icy Brigadoon, more fable than fact. But now, standing on Goudier Island, nothing seems more real than blue ice and pink penguin droppings and black earth under winter white. Now the rest of the world seems more fable than fact. Why build cities when there are skylines like this? Why write operas when you can hear a glacier fall into the sea? Why worry about little things when there are such grand discoveries to be made?

That's how the mind works when it's been caught by the ice.