Accessibility links
Long Duk Dong: Last of the Hollywood Stereotypes? He was comic relief in a slapstick movie — and to many, one of Hollywood's most offensive Asian stereotypes. NPR's Alison MacAdam examines the Sixteen Candles character who inspired a generation to ask, "What's happenin', hot stuff?" 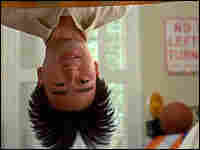 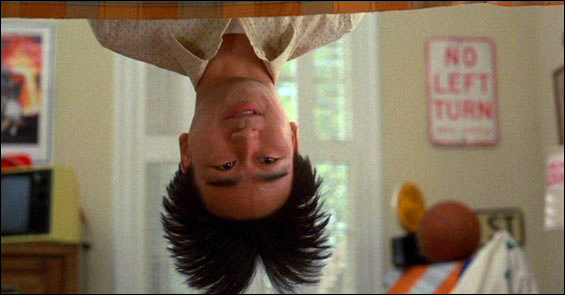 Gedde Watanabe's Long Duk Dong drew laughs — and fire from critics who decried the character as a racist caricature.

Tomine on The Donger 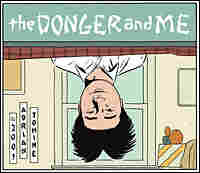 In 2001, graphic novelist Adrian Tomine (Shortcomings) published a pungent one-page comic describing his own history with the legacy of Long Duk Dong.

Funny? Offensive? You Make the Case: The 'In Character' Blog

'Drunk as a Skunk' 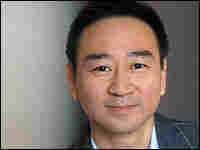 Japanese-American actor Gedde Watanabe, who does not speak Japanese, describes his audition for the role of Long Duk Dong — and the trick he used to win the part.

'It Was Rather Shocking'

For a generation of Americans, the answer to that question is a name: Long Duk Dong. He is the foreign-exchange student, fresh from some unidentified Asian country, in the popular 1984 high-school comedy Sixteen Candles — comic relief in a movie with more than its share of slapstick.

When we launched In Character, we set out to explore fictional characters who had left a mark on American culture. The mark Long Duk Dong left was more of a stain: To some viewers, he represents one of the most offensive Asian stereotypes Hollywood ever gave America.

Long Duk Dong makes his first entrance in the movie upside down, hanging from a top bunk, waggling his eyebrows at the female protagonist of Sixteen Candles and trying out his conversational English: "What's happenin', hot stuff?"

Then it's on to the average American dinner table, where the food seems completely foreign to him. He's mystified by quiche; confronted with a fork and spoon, he uses them like chopsticks.

Long Duk Dong wears his hair in what we called a "butt-cut" back in the '80s — parted straight down the middle. He is not one of the cool kids. But he proceeds to have the night of his life: At the high-school dance, he finds romance, gets seriously drunk and ends up in a tree, hollering, "Oh, sexy girlfriend!"

Then he jumps onto the person below — who turns out not to be his new American girlfriend.

By morning, Long Duk Dong — portrayed by actor Gedde Watanabe — lies splayed out in his host family's front yard. When they discover him, the inanity continues: "Oh, no more yanky my wanky," he moans. "The Donger needs food."

Those are the greatest hits of "The Donger": No more yanky my wanky ... Oh, sexy girlfriend ... What's happenin', hot stuff?

Oh, and along the way? His every entrance is accompanied, mysteriously, by the sound of a gong.

'Every Bad Stereotype,' Rolled Into One Character

In the '80s, teenagers quoted Long Duk Dong endlessly. He became one of the most enduring characters of the decade's teen comedies. It's his face — not that of Molly Ringwald's heroine — on the Sixteen Candles DVD in that red Netflix envelope.

Long Duk Dong is the creation of writer-director John Hughes, whose films — The Breakfast Club, Pretty in Pink, Ferris Bueller's Day Off — enshrined a Hollywood-heightened image of a suburban high school near you. Geeks, jocks, cheerleaders, kids desperate to find an in with the popular crowd — they were the standard character set.

"Every single Asian dude who went to high school or junior high during the era of John Hughes movies was called 'Donger,'" says Martin Wong.

"If you're being called Long Duk Dong," Wong explains, "you're comic relief amongst a sea of people unlike you."

Worse, says Nakamura: "You're being portrayed as a guy who just came off a boat and who's out of control. It's like every bad stereotype possible, loaded into one character."

Nakamura and Wong say that before "The Donger" came along, they got called "Bruce Lee" at school. That wasn't so bad: At least Lee, the martial-arts star, could kick ass. Sixteen Candles stole even that limited pleasure — and Asian-American guys focused their frustration on the actor who played Long Duk Dong. After all, he was one of them: born in the U.S.A.

Gedde Watanabe is 52 now. He grew up in a Japanese-American family in Ogden, Utah. His parents settled there after his mother was forced into a U.S. internment camp during World War II.

"But probably most people know me as Long Duk Dong," he confesses, "which is still hard for me to say."

Watanabe left Utah at 18 to become a performer; Sixteen Candles was his big Hollywood break. Since then, he has developed a pretty long resume doing movies, theater voice-over work and TV. (He played Nurse Yosh on ER.)

He is currently filming a thriller in New Mexico. And even there, he was recognized — at a Wal-Mart — as Long Duk Dong.

"People still come up to me to this day and quote my lines," he says. "'What's happenin', hot stuff?' 'Oh, sexy girlfriend.'"

Watanabe says making Sixteen Candles was a great experience, but one that, in retrospect, he realizes he was "a bit naive" about.

"I was making people laugh," he says. "I didn't realize how it was going to affect people."

In 1984, when Sixteen Candles came out, some Asian-American groups decried Long Duk Dong as stereotypical, racist and part of a long history of Hollywood's offensive depictions of Asian men.

"It took me a while to understand that," Watanabe says. "In fact, I was working at the Metropolitan Museum of Art, and I was accosted a couple of times by a couple of women who were just really irate and angry. They asked, 'How could you do a role like that?' But it's funny, too, because at the same time I laugh at the character. It's an odd animal."

It is an odd thing, that line between comedy and offense. Nakamura and Wong, from Giant Robot magazine, clearly see some humor in Long Duk Dong, too. Even as they condemn the character, they laugh about his silly antics in the movie. And they understand Watanabe's conflict.

"I feel bad for the guy in the end because he's had to live with the fact that all these Asian-American men hate him," says Nakamura.

The situation for Asian-American men in Hollywood has improved a bit since 1984. There are more Asian Americans behind the camera, and more substantial roles, especially on TV. As far as film actors go, many people mention John Cho. He is best known for playing Harold in the comedy Harold & Kumar Go to White Castle and in an upcoming sequel.

But Asian-American actors are still trying to overcome several big issues. They want more roles that are simply American, not ethnic.

And, says Watanabe: "We really need an Asian-American star, and it hasn't happened." Hollywood may be importing leading men from Asia, one oft-heard argument says, but it has a ways to go with Asian Americans.

As for Long Duk Dong, he lives on in pop-culture memory — though in some places, as more than a stereotype.

Most weekends, at O'Neill's Irish pub in Lexington, Ky., you can catch Long Duk Dong — the '80s cover band. Hundreds of fans come out to hear their loyal renditions of '80s pop tunes.

"It's odd that a character that's not a primary character would have so much notability," says band co-founder Shan Justice. "But that one certainly did."

True enough: More than 20 years after Sixteen Candles came out, people are still laughing at — and cringing over, and sometimes singing along with — the phenomenon that is Long Duk Dong.

In the original version of this story, a quote from Martin Wong was incorrectly attributed. Both the audio and text versions on this page have been corrected.