Accessibility links
Nick Trout: Animal Medicine from a Vet's-Eye View Dr. Nick Trout joins Fresh Air to talk about his memoir Tell Me Where It Hurts. Trout is a staff surgeon at Boston's Angell Animal Medical Center, a 185,000-square-foot facility that treats 50,000 pets a year. In his day, he's given a CAT scan to a rat and done an ultrasound on at least one frog. 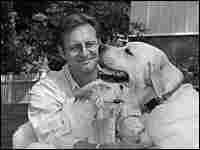 Veterinarian Nick Trout joins Fresh Air to talk about his new memoir, Tell Me Where It Hurts: A Day of Humor, Healing and Hope in My Life as an Animal Surgeon.

The British-born, Cambridge-educated Trout is staff surgeon at Boston's Angell Animal Medical Center, a 185,000-square-foot facility treating 50,000 animals each year. He's performed CAT scans on rats and at least one ultrasound on a frog — and he says that in his two and a half decades of practice, he's seen the relationship between pets and people change dramatically.

His personality, says a Publishers Weekly review, "suffuses the many stories sifted from recollections of thousands of animal encounters during his 25 years of practice," and the book "shows how the daily life of a veterinarian requires the ability to be a social worker, a psychologist, a grief counselor, mentor, carpenter, plumber, cosmetologist, athletic coach, magician, grim reaper, and occasionally, guardian angel."

Excerpt: 'Tell Me Where It Hurts' 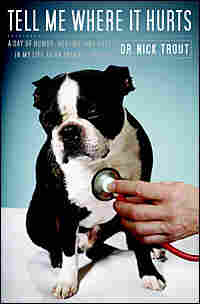 This might seem strange, coming from an Englishman, but sometimes emergency surgery in the middle of the night can play out like a synopsis of a perfect season for the Boston Red Sox. The beginning may be predictably crappy, slow, and discombobulated until a rhythm develops and momentum builds leaving you stricken with that familiar glimmer of hope. When it comes to the final stretch, everyone accepts that there may be failure, there may be disappointment, but the struggle is always gritty and memorable, and occasionally, if you are really lucky, something magical will happen.

My beginning came half an hour earlier with a phone call reeling me in from a cozy dreamless void.

"Hello," I said, two disjointed syllables caught in a sticky web at the back of my throat.

All I heard was sound, not words I could interpret, my brain dormant on my pillow.

"Hello, are you still there?"

"Yeah, sure, I'm listening," I croaked, wiping a palm across my face. "What time is it?"

She told me and dove into her apology.

"I really hate to disturb you but, like, my backup's not answering his pager and, like, I didn't know what else to do." Her words surfed through me—a Valley Girl inflection—and sluggish gray matter dug out a memory of a recent departmental memo—"Be sure to welcome our first-year surgery resident, Dr. Sarah Keene, from the University of California, Davis."

I came awake, sat up in bed, and told my wife to go back to sleep.

"No problem, Dr. Keene. Tell me about your GDV."

As a new surgery resident, Dr. Keene may know all about GDV, an acronym that stands for gastric dilatation and volvulus, commonly referred to, with a satisfying rustic flavor, as "bloat." But more than likely, at this stage in her training, her understanding is primarily academic, words and phrases in a textbook, disease as bullets of information in shocking fluorescent pink highlights. She will be a year out from veterinary school, a year in which she will probably have diagnosed and managed several cases of GDV. She knows all about this bizarre anatomical aberration and the inevitable, rampant pathology it will incite. She even knows exactly what needs to be done. But, until now, until tonight, she has never been the one who actually picks up a scalpel and makes the cure happen. Tonight, for the first time in her professional career, she is the surgeon on call, and not surprisingly, she is in need of some help.

GDV is a true veterinary surgical emergency. It typically occurs in deep-chested dogs like German shepherds, Great Danes, and standard poodles but, on occasion, I've even seen it in breeds as small as dachshunds. No one is entirely sure why it happens, but oftentimes the animal eats a large meal, gets some exercise, and an hour or so later the problems begin. Fermented gas starts to accumulate in the distended stomach, and for whatever reason the entire organ twists around and flips over on its long axis. The effect is catastrophic. The twist blocks off the esophagus, so despite the poor creature's desire to throw up and rid itself of all that food and gas, nothing will budge. The stomach expands unchecked, destroying its own blood supply, driving into the chest and squashing the lungs and the blood flow back to the heart. There is no absolute timetable for how long an animal can survive in this state, but dogs can die in a matter of hours.

As soon as the diagnosis is made, the clock is ticking.

"She got into a full bag of kibble around seven. Owner took her for a walk before bed. He could hear the dog trying to vomit unsuccessfully around midnight and drove her all the way up from the Cape. She looks ready to explode. Classic double-bubble on abdominal X-rays."

I had been waiting for this description, the twisted, distended stomach looking like the silhouette of a giant heavyweight's boxing glove on an X-ray. It tells me her diagnosis is correct.

"Not really," said Dr. Keene. "Her pressures are through the floor and we're having a hell of a time just finding a decent vein, let alone placing a catheter."

My feet were swinging out of the bed and I began to fumble for clean clothes.

"Do your best. Try to pass a stomach tube. I'll be there as fast as I can."

Angell Animal Medical Center, part of the Massachusetts Society for the Prevention of Cruelty to Animals, is located in the eclectic and increasingly gentrified Boston neighborhood of Jamaica Plain. There are no world rankings of veterinary hospital size, but at 185,000 square feet I imagine Angell is one of the larger ones, with over seventy veterinarians serving nearly fifty thousand dogs, cats, and exotic pets every year.

After ten years on staff as a surgeon, I know that those nasty rumors about Boston traffic are all subterfuge because at three in the morning, an easy commute is rewarded with my pick from one of the primo parking spots close to the front door.

It is January in New England. There are a couple of inches of snow on the ground, a miniature version of the Andes has been plowed against the perimeter wall, and today's high will be only ten below. I walk across the salted asphalt like a geriatric with a bad case of hemorrhoids, poised to slip on the black ice. Despite the hour, my sleepiness is starting to burn off like fog on an imaginary sunny morning as I enter this five-story brick building and head toward the nonsterile surgical prep area. The corridors are empty, floors polished, phones silent, and pagers dead. I have entered an antiseptic ghost town and I like the way it feels. It reminds me of being a kid again, of breaking into the neighbor's backyard in order to steal the ripe apples taunting me from their tree. The mission is covert, even risky—all but guaranteeing the rewards will make it worthwhile.

Cutting through the radiology department, I catch a glimpse of my reflection in the glass window outside the MRI unit. The man I see looks unfamiliar. He has piggy eyes, a pillow-crease scar across his left cheek, and a jaunty case of bed head. Thank goodness my patients never judge me on my appearance.

My patient lies splayed across a large gurney, nervous nails clawing for purchase on the stainless steel surface. She is a big girl, obviously not lacking for love in the calorie department. Her darting chocolate eyes scream in fear of her strange situation and the changes taking place in her body, but as I enter the room and approach, her broad and bushy tail offers me a couple of friendly beats. I like German shepherds. I grew up with one as a kid, but this gesture strikes me as both uncharacteristic and, at the same time, utterly endearing. Until this moment I have been dealing with an anonymous and remote animal reduced to a list of diseases, conditions, problems, and deformities. Suddenly everything has changed. This animal has a name and a personality. This animal has become my patient. This is the moment when I begin to care.

I pat her head and run my hand across a soft velvety ear, over her chest and down to the enormous, unyielding abnormality that is her drum-tight abdomen.

"Hi, sweetheart. You hanging in there?"

Copyright © 2008 by Dr. Nick Trout. From the book Tell Me Where It Hurts, published by Broadway Books, a division of Random House, Inc. Reprinted with permission. 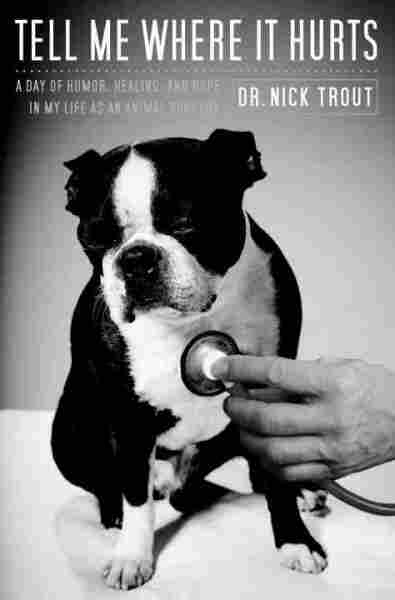 Tell Me Where It Hurts

A Day of Humor, Healing and Hope in My Life As an Animal Surgeon

Title
Tell Me Where It Hurts
Subtitle
A Day of Humor, Healing and Hope in My Life As an Animal Surgeon
Author
Nick Trout