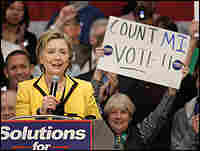 Explore an Archive of Documents from Clinton's Years as First Lady

More than 11,000 pages of documents detailing New York Sen. Hillary Clinton's agenda during her eight years as first lady were released on Wednesday.

Clinton, now a Democratic candidate for president, has come under pressure to make her first lady schedules public.

The documents were released jointly by the National Archives and the Clinton Presidential Library.

Clinton's campaign said the thousands of pages of schedules are just a guide, but that they show that Clinton tackled substantive issues such as health care and Social Security as first lady, in addition to traveling the world.

One turbulent time for the Clinton White House came in 1998, during President Clinton's impeachment. Independent Counsel Kenneth Starr testified at an impeachment hearing on Nov. 19, 1998. Clinton was not in Washington that day. Her schedule showed that she was in Guatemala, speaking to lawmakers and visiting Mayan ruins.

The schedules also offer a window into the details of White House planning. On Jan. 18, 1999, the Martin Luther King Day of Service event was marked as "optional" for the first lady. The president and vice president were expected to attend. The schedule even instructed them to change into AmeriCorps sweatshirts for the ceremony.