Accessibility links
Obama's Speech on Race Tops YouTube The most popular video on YouTube has no lip-synching Chinese teenagers, no babies falling over, no drunk cats: It's Barack Obama's speech on race. So far, the Obama speech has been clicked on 1.6 million times and has drawn more than 4,000 comments, ranging from "awesome" to "no, we can't" to "Barrack to the Future!!"

The most popular video on YouTube has no lip-synching Chinese teenagers, no babies falling over, no drunk cats: It's Barack Obama's speech on race.

So far, the Obama speech has been clicked on 1.6 million times --though it's not possible to tell whether viewers watched all 37 minutes.

Sen. Barack Obama (D-IL) called for unity during a major address on race and politics at the Constitution Center in Philadelphia on Tuesday. Thomas Cain/Getty Images hide caption 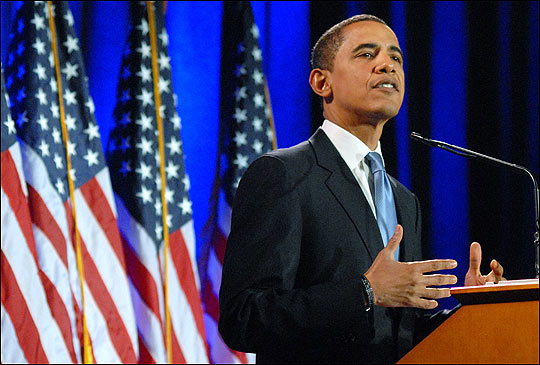 Sen. Barack Obama (D-IL) called for unity during a major address on race and politics at the Constitution Center in Philadelphia on Tuesday.

Sen. Barack Obama (D-IL) was in Philadelphia on Tuesday, within footsteps of the city's historic Liberty Bell and Independence Hall, to give what his advisers described as a major address on "race, politics and unifying our country."

As a presidential candidate who preaches unity, Obama faced the challenge of explaining the divisive remarks of his longtime pastor from Chicago, the Rev. Jeremiah Wright. In recent days, these remarks have been a fixture on the cable news networks and in the political blogosphere.

The speech was not a usual Obama event. The crowd was small, just a few hundred people. Obama came in with little fanfare and stood at a bare wooden podium. He talked first about some of the progress that he feels he has made in the campaign so far.

"Despite the temptation to view my candidacy through a purely racial lens, we won commanding victories in states with some of the whitest populations in the country. In South Carolina, where the Confederate Flag still flies, we built a powerful coalition of African-Americans and white Americans," he said.

In truth, Obama attracted different coalitions from state to state. But in places such as South Carolina, Ohio and Georgia, he has struggled to appeal to whites.

There always seems to be a risk of racial divide in the Democratic campaign. But the risk never seemed as high as during the past week, when sermons given by the Rev. Wright began showing up on cable news. They were sound bites in which Wright railed against white America. On Tuesday, Obama said his pastor was expressing a "profoundly distorted view" of the United States.

"I can no more disown him than I can disown the black community," Obama said about Wright, who officiated at his wedding and who baptized his two daugthers. "I can no more disown him than I can my white grandmother — a woman who helped raise me, a woman who sacrificed again and again for me, a woman who loves me as much as she loves anything in this world, but a woman who once confessed her fear of black men who passed by her on the street, and who on more than one occasion has uttered racial or ethnic stereotypes that made me cringe. These people are a part of me."

He went on to say that whites, like his grandmother, have reason to be angry, too.

"So when they are told to bus their children to a school across town; when they hear that an African-American is getting an advantage in landing a good job or a spot in a good college because of an injustice that they themselves never committed; when they're told that their fears about crime in urban neighborhoods are somehow prejudiced, resentment builds over time," he said.

Obama then brought his speech back to Wright. He said that if his pastor is right about one thing — that racism is endemic to America — then his candidacy loses its foundation.

Reaction to the Speech

The invited audience members were mostly Obama supporters, many of them religious leaders who have been paying close attention as Rev. Wright's sermons have made headlines. The Rev. Ellis Washington, pastor at St. Matthew AME Church in Philadelphia, said he has been known to give some Wright-style sermons.

"Maybe not the same language, but to speak on contemporary problems, on social issues, to speak to, especially, an African-American community, that puts it into context with our experience in terms of racism and prejudice and those kinds of things. It happens all the time. It may not happen in every sermon, but it is part of my ministry and many people I know," Washington said.

"He didn't try to skirt the issue and really spoke to us about race from a very honest and transparent place," he said.

Washington said he feared that the headlines about Obama's speech could miss the nuance of his message. Those headlines were already moving across a big news ticker on a building across the street from where Obama spoke. Rabbi Michael Bernstein saw the headline as soon as he came out of the speech.

"I have to say, I was looking across the window to where the ticker is and already it says, 'Obama disavows pastor, but refuses to disown him,' and I'm afraid people will get that message; he only went halfway," he said.

Obama had no easy task, Bernstein said, digging into his pastor's racially charged remarks to find some uplifting lesson. "It's a risk. It's the kind-of risk that has kept other people from doing the same kind of thing and has dragged our conversation down," he added.

As a voter, Bernstein said he has no idea whether he will support Obama. He simply said he appreciated the candidate's message on this day.