Accessibility links
'Blindsight' Six Tibetan teenagers trek to the top of the 23,000-foot-high Lhakpa Ri peak, on the north side of Mount Everest — a trek that might well be worthy of documenting even if the climbers weren't blind. 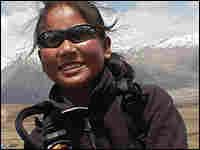 Six Tibetan teenagers trek to the top of the 23,000-foot-high Lhakpa Ri peak, on the north side of Mount Everest, in this documentary — a fact that might well be worthy of recording even if they weren't blind.

Yup, you read that right: blind. The fellow who cooked up the trip, and who accompanies them and their teacher (also blind), is Erik Weihenmayer, who is perhaps the most celebrated of the world's mountaineers, because he too is ... yes, blind. (A team of Brit guides were also along, as was the film crew, but still.)

Lucy Walker's film explores not just the dangers of the climb, but the lives of the kids — all students of Tibet's only school for the blind — as well as the approaches of their families to the issue of their blindness; the latter turn out to be quite different in some ways from the approaches Western families might take.

To some extent, the filmmakers also question their own motives (the trek was arranged so that it could be filmed) and whether the building of hope and fortitude in these youngsters outweighs the obvious dangers of so hazardous a journey.