Accessibility links
The Politics of Walter Mitty, a Giant in His Own Mind Since he first appeared in print 69 years ago, the fictional Walter Mitty has become synonymous with ineffectual optimism. From Nixon to Bush and even Hillary Clinton, many a politician has been compared with scorn to James Thurber's fictional henpecked daydreamer.

Listen
The Politics of Walter Mitty, a Giant in His Own Mind 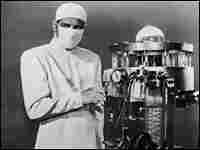 Danny Kaye portrays Walter Mitty in the 1947 film version of James Thurber's short story. The scene, in which Mitty fantasizes about emergency-room glory, is one of the few in the film to be recognizable from Thurber's tale. Hulton Archive/Getty Images hide caption 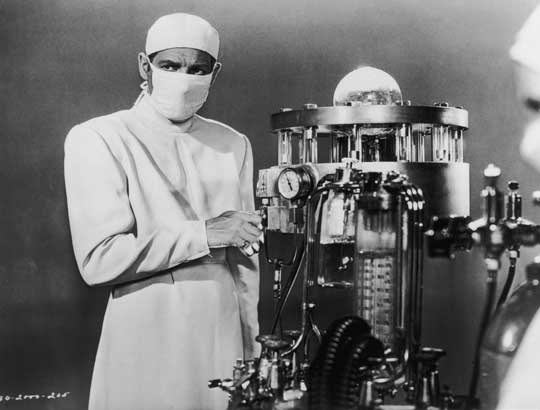 Danny Kaye portrays Walter Mitty in the 1947 film version of James Thurber's short story. The scene, in which Mitty fantasizes about emergency-room glory, is one of the few in the film to be recognizable from Thurber's tale.

In one famous scene from the 1947 screen adaptation of "The Secret Life of Walter Mitty," actor Danny Kaye's Mitty becomes a zany Czech orchestra conductor. It's one of many in the film adaptation that never appeared in Thurber's tale.

See a Walter Mitty for Our Time? Tell Us at the 'In Character' Blog

Whether you're a politician or anyone else in the limelight, you probably won't want to be compared to Walter Mitty. And yet many public figures have been, ever since The New Yorker published humorist James Thurber's short story "The Secret Life of Walter Mitty," about a henpecked daydreamer, 69 years ago this week.

In the decades since, "Walter Mitty" has entered the lexicon as shorthand for political ridicule — he's even in the Merriam-Webster Collegiate Dictionary. It defines him as "a commonplace, unadventurous person who seeks escape from reality through daydreaming."

But that's not the impression you get as Thurber's tale begins with the words "We're going through!" It's a voice Thurber compares to "thin ice breaking," the voice of a fearless naval flight commander. Mitty is in "full-dress uniform," with a "heavily braided white cap pulled down rakishly over one cold gray eye." The commanders' crew members are clearly frightened by an approaching hurricane.

At this moment of triumph and vindication, Mrs. Mitty's voice breaks in to chastise the commander with the words, "Not so fast! You're driving too fast!"

Thus yanked from his reverie, Mitty briefly returns to the humdrum world happening outside his head, then lapses back into a series of other fantasies invariably starring himself as the hero.

Author and His Creation

So just who was this Walter Mitty?

"Walter Mitty was James Thurber in 1939," says Harrison Kinney, author of James Thurber: His Life and Times. "He enjoyed being Walter Mitty. He was a great fancier and a great dreamer."

Kinney's book is considered by many to be the definitive Thurber biography. Kinney says Thurber was almost blind when he wrote the "Secret Life of Walter Mitty" and was enormously dependent on his second wife, Helen.

"And of course, Helen knew much too much about him and his infirmities, so every time he would climb into his balloon of, you know fantasies, and take off, it was always she who grabbed the rope and pulled him back down," Kinney says.

Thurber's Walter Mitty yarn gained fame after being reprinted in Reader's Digest; it was also included in a collection of Thurber stories sent to U.S. troops during World War II and was a big hit. Air Force pilots named their planes after Walter Mitty; they used "pocketa pocketa" to signal one another.

In 1947, Hollywood discovered Walter Mitty, with Danny Kaye in the title role. But spinning a two-hour feature-length film out of a 2,000-word story demanded some artistic license. A famous scene in which Kaye's Walter Mitty becomes a zany Czech orchestra conductor was one of many in the film adaptation that never appeared in Thurber's tale.

On screen, Mitty's fantasies eventually give way to him heroically solving a real-life murder mystery. One Thurber expert, retired Ohio State University dean James Tootle, says Thurber found the movie version of his creation unrecognizable. After viewing the film with friends, Tootle says that Thurber joked, "Did anyone catch the name of that film?"

"They had changed it so much, you know, from the story that he wrote ... that he just wasn't very happy with it at all," Tootle says.

The Politics of Mitty

Who knows what Thurber would say about more recent mentions of his iconic daydreamer? Earlier this year, FoxNews commentator Dick Morris belittled claims made by presidential contender Hillary Clinton thus:

"All of a sudden, she was the economic wizard and the diplomatic person. She's like Walter Mitty, inventing this alternate life.The voters are seeing through her."

And MSNBC's Keith Olberman lampooned President Bush's famous 2003 "Mission Accomplished" declaration on the deck of an aircraft carrier as "the Walter Mitty poseur attire of flight suit and helmet."

I asked James Thurber about all this — not the author, who died in 1961, but political scientist James Thurber of American University.

"I don't think it is a positive thing to compare a politician to Walter Mitty," he said. "It shows that there's a secret world inside of a person, and he's not really revealing, or she's not revealing, everything about what they really believe in."

In 1973, with war breaking out in the Middle East, Henry Kissinger urged a presidential aide to have then-President Richard Nixon remain in Florida, in Kissinger's words, "to keep any Walter Mitty tendencies under control." Presidential historian Robert Dallek says Kissinger was on the mark.

"Richard Nixon had a kind of Walter Mitty fantasy life," Dallek says. "He was a man with a grandiose thoughts, dreams of not simply being president but maybe becoming one of the truly great presidents of American history."

British politicians have been equally prone to Walter Mitty comparisons. Michael White, a political writer for the The Guardian, says Harold Wilson, Britain's prime minister during Nixon's presidency, was widely regarded as a Mitty type.

"Although a very clever man, [Wilson] had a sort of fantasy life, and he would come up with all these brilliant ideas which didn't really touch base much," White says. "One of them, for example, is he would send off peace missions to Hanoi."

"He's soaring and he's excited and life is wonderful, you know, and the crowd is excited and she comes in and says, 'Wait a minute, what are you talking about, let's get real?'"

That such parallels are still being drawn makes Thurber biographer Harrison Kinney confident that Walter Mitty is here to stay "as long as people go on dreaming of becoming someone that they aren't, or aspiring to become something that they would like to be."