Accessibility links
A New Tour of Duty: The USO's Evolving Marquee For more than 60 years, the USO has been entertaining America's military men and women around the world. But the troops' tastes have changed a lot since the days when Bob Hope made the GIs smile.

Listen
A New Tour of Duty: The USO's Evolving Marquee 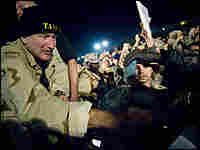 Videos of Other USO Tour Stars

Fifty years ago this week, one of the Army's most famous soldiers reported for duty. He turned up at Fort Hood, Texas, sporting a fresh GI buzz cut. The Army assigned him to a tank battalion, but he did his best-known work outside the tank. His name? Elvis Presley.

Elvis, who rose to the rank of sergeant, still has fans among the troops. But today's men and women in uniform also want other sounds, USO President and CEO Ned Powell tells NPR's Liane Hansen. The heavy metal band Drowning Pool, for example, has made two USO-sponsored concert tours to Iraq.

For 67 years, the United Service Organization has been putting on concerts and other events to boost the morale of American troops stationed around the globe. During World War II, Bob Hope was a favorite. Elvis didn't perform at any USO events – though Powell thinks The King probably did take advantage of USO coffee and doughnuts.

These days, the USO produces shows by bands, football players and comics – like Robin Williams, who performed at Camp Arifjan in Kuwait in December 2007. In the middle of Williams' routine, a trumpet sounded and his entire audience turned their backs to him to salute a U.S. flag as it was lowered.

Besides the concerts and performances, the USO also sponsors things like care packages, phone cards and "USO in a BOX," a new program that sends CD players, TV sets and other electronic gear to troops in far-flung locations.

"You get over there, and you'll get almost anywhere on the front lines and people say, 'Does anyone back there know we're still here?' " Powell says. "And our point is very simple: Yes, we do."