Accessibility links
A Native American's Last Testament: Opera Ascension Solorsano de Cervantes was the last known member of the Amah Mutsun tribe fluent in her people's language. Now, an opera singer and a composer have written what they're calling an "ethno-historical cantata" based on her oral history. 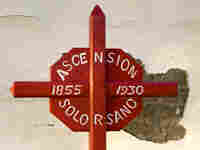 Ascencion Solorsano was buried in the cemetery at Mission San Juan Bautista in California. The mission's bells were incorporated into Ascension. Randy Vaughn-Dotta hide caption

View a slideshow about Ascension, produced by KQED. 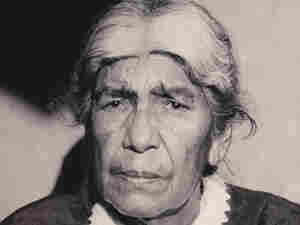 Joseph Mondragon was just 8 years old when a man with an olive-green soldier's coat came to live in his family's basement in Monterey, Calif. The year was 1929.

"Grandma said she knew he was coming," Mondragon said. "She felt it; she had a premonition that he was coming to open the gates for our people and let the Caucasians know the Indian way, the history of our people, which nobody knew for a long time."

The man was John Peabody Harrington, a linguist from the Smithsonian who spent four decades gathering notes on native languages spoken from Alaska to South America. He'd come to record the oral history of Mondragon's dying grandmother, Ascencion Solorsano de Cervantes. She was a famous herbal healer and the last known fluent speaker of Mutsun, the language of the Amah Mutsun tribe that lived near California's central coast.

Today, her grandson Joseph is 86, and he's sharing his own memories of Ascencion Solorsano with a different sort of translator: an opera singer.

Mezzo-soprano Helene Joseph-Weil is a music professor at Fresno State. She first learned about Ascencion Solorsano 20 years ago, when she saw a picture of her in the San Francisco Chronicle.

"I was so moved by it," Joseph-Weil says. "And there was something about her photo that just mesmerized me, that I suddenly said: 'I have to sing her. How can I sing her?'"

Along with award-winning composer Benjamin Boone, a fellow Fresno State professor, she is working to put Ascencion Solorsano's oral history into a piece called Ascencion. They're calling it an "ethno-historical cantata."

"She trusted Harrington," Joseph-Weil says. "She said in one of our direct quotes to him it's a curious thing that the Americans waited until all those that are dead and finished to find out about the tribes and their language, and they just scribbled down any old thing. But she said, 'Together, you and I are going to make that right.'"

In a scene called "Lamentation," Boone tries to express the horror of Native American genocide through wide leaps in the choral parts — dramatic sounds that are almost discordant.

The work has won the praise of historians and Native American scholars like University of California-Davis professor Martha Macri. She's spearheading an effort to digitize the oral histories Harrington collected. She says that setting these histories to opera is an innovative idea — and one that she thinks Joseph-Weil has handled respectfully.

"It's not someone trying to imitate native culture and pretend," Macri says. "She has really taken her great respect and regard for Ascension and translated it into an art form that is her art form. It can seem quite incongruous, but in fact she's presenting Ascension's life and words to an audience that might not otherwise come across it."

For the song of Ascencion Solorsano's death, Joseph-Weil and Boone made the first recording of the bells at Mission San Juan Bautista in California, and arranged them for a chorus. Ascencion Solorsano was buried at the Mission cemetery, home to some 4,000 Native American graves from different tribes.

Ascencion Solorsano's descendents say they hope the new cantata will help people learn about her tribe. Today, there are some 600 members, and they're still struggling for federal recognition.