Accessibility links
Border Fence A Great Divide For Texas Landowners The federal government has sued dozens of Texas landowners in the Rio Grande Valley to gain access to their property to build a border fence. Some residents fear for their homes, while others worry about environmental fallout. 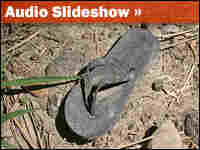 AUDIO SLIDESHOW: The Lay of the Land in Battle Over Border Fence 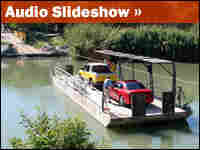 Baldemero Muniz is a Texas landowner who has refused to sign a waiver allowing Homeland Security to access his riverfront land. Coburn Dukehart, NPR hide caption 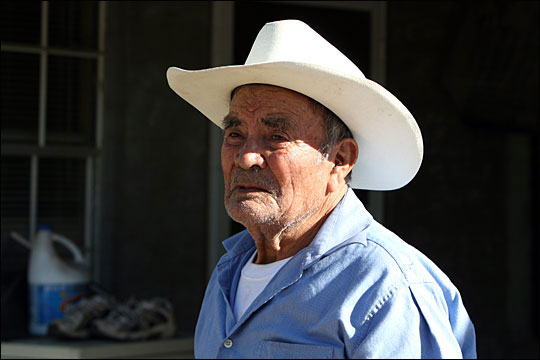 Baldemero Muniz is a Texas landowner who has refused to sign a waiver allowing Homeland Security to access his riverfront land. 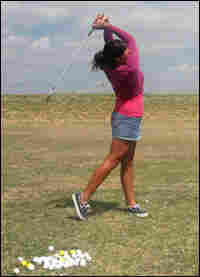 April Martinez attends the University of Texas at Brownsville on a golf scholarship. If the government builds the border fence according to plan, it will cut off access to the golf course at the school. Carrie Kahn, NPR hide caption 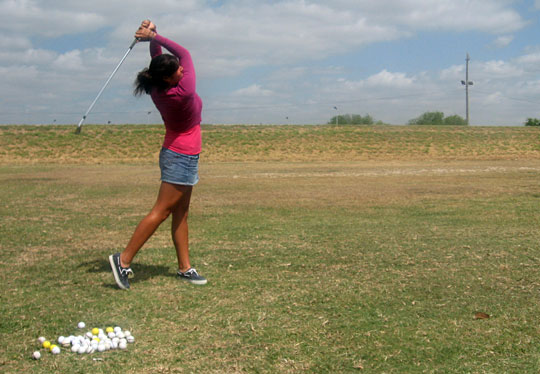 April Martinez attends the University of Texas at Brownsville on a golf scholarship. If the government builds the border fence according to plan, it will cut off access to the golf course at the school.

Dozens of landowners in south Texas are fighting plans by the federal government to build a fence along the U.S.-Mexico border. The property owners in the Rio Grande Valley have refused to let U.S. surveyors onto their land. The government is suing to gain access, which it says it needs to complete nearly 370 miles of border fencing by the end of the year.

Hilaria Muniz and her husband, Baldemero, have lived on a dusty bluff overlooking a bend in the Rio Grande River for more than 30 years.

"It took a lot of hard work and sacrifice to build this house," said Baldermero Muniz, 84. "We used to migrate for work every year to Michigan. One year we were able to buy the blocks, then the cement and then we were able to finally put on the roof. It took us five long years."

The couple no longer migrates. They live off a small pension and the sale of their goats.

Last December, a U.S. Border Patrol agent asked Muniz to sign a paper allowing the government to survey his land for the border fence. Muniz, who doesn't read or write, refused. The government sued. The family sought help from rural legal aid lawyers.

Their attorney, Celestino Gallegos, said the government has also sued some 50 other landowners in the Rio Grande Valley. In each case, he said, the government demands unlimited access for six months and was willing to pay only $100 for the inconvenience.

"That was across the board for every single landowner," Gallegos said. "No matter if you had 100 acres or if you had — in the case of the Muniz family — a third of an acre, the access to it and any kind of damage that could be caused is only worth $100."

Last week, a federal judge criticized what he called the government's poor negotiation skills with landowners. He is set to rule on several of the lawsuits as early as today. The judge also dismissed one of the more controversial suits, against the University of Texas at Brownsville, after lawyers for both sides came up with an 11th-hour compromise that will allow federal surveyors on the campus.

According to government blueprints, the proposed fence would cut off parts of the university, including the golf course and the city's historic Fort Brown.

Robert Lucio is the school's golf instructor and operates the course, which snakes along the banks of the Rio Grande. From the driving range, you can see the tallest buildings across the border in Matamoros, Mexico.

"Golf got me my education, my degree in college and it's done everything for me that I can imagine," Lucio said. "Now it's the source of my income and my business."

If the government builds the fence according to plans, it would entirely wall off the course. Lucio said he recently spent $800,000 on renovations, and he doesn't think golfers will pass through a border checkpoint to play inside a walled fortress.

"This whole situation with the border fence is probably the worse thing that could have happened," he said.

Many students feel the same way. April Martinez and Anthony Lopez both attend the university on a golf scholarship.

"Of course you want to stop illegal immigration or have processes to do so, but not with a fence," Martinez said. "That seems sort of barbaric and ancient."

Lopez said the fence could hinder his practice time. "In between classes, I like to come and I'll have a putter in my car and I'll work on my short game for 30 minutes. And it might not be possible if something goes up in between us."

A federal levee system already runs between the river and many urban centers in the Rio Grande Valley. One idea is to build the border fence onto these existing earthen levees. However, the river is anything but straight, and the levees don't follow its natural curves and bends. At some points, the levees are up to a mile away from the border. This means the fence could create a no-man's land, isolating large tracts of land, including sensitive environmental corridors.

During a canoe tour of the river for nature enthusiasts, guide Betty Perez expressed concern about effects on the region's wildlife.

"If you look over here on the American side, you see a pretty high wall of trees and foliage, and this is the area where they want to put the wall. We call it 'wall' down here."

The South Texas native said that at 15 feet tall, the barrier is hardly a fence and will impede animals such as the endangered ocelot from getting to the river's edge. An all-terrain road that will be cut alongside the fence will destroy thousands of acres of habitat for migrating birds such as gray hawks, Muscovy ducks and red-billed pigeons, she said.

"We call them 'million dollar birds' because ecotourism is huge in the Rio Grande Valley," she said.

But illegal immigration is also huge. Border Patrol agents had been arresting more than 100,000 people crossing illegally every year, though the number has dropped recently due to increased manpower and equipment.

Border Patrol Chief Ron Vitello says a fence is the best way to get people to stop crossing over using the valley.

"We know that where we put these barriers up it will change traffic patterns, it will increase our efficiency, because generally folks will try to go around the infrastructure that's there," he said. "Over time, what will likely happen in the locations where we have fencing is people will stop crossing."

Vitello said he has listened to property owners' concerns and insisted no construction plans have been finalized. But he noted that agents have thoroughly studied the Rio Grande Valley and answered his most important question.

"If we had a fence as part of the terrain here, would it assist us in doing our job? And the answer is yes in all the locations," he said. "I'm confident in the requirement that we've established. How that plays out and how we gain access to land, those kinds of things, that's always difficult."

It's been difficult for the Muniz family to live with the uncertainty over the fate of their home. They took some comfort in the federal judge's comments last week urging the government to negotiate better with landowners. But the judge also made it clear that, in the end, the government has the authority to take private land.

Hilaria Muniz is resigned to that possibility, yet she joked about a 15-foot fence going up on her property: If they build the fence, she said, it will block out the sun — and she'll have to start depending on a clock to know the time of day.