Accessibility links
Tibet Activists Plan Olympic-Relay Protests The crackdown in Tibet has attracted the attention of human-rights activists. On Monday, the Olympic flame begins an 85,000-mile journey on its way to Beijing, site of the 2008 Olympics. Protesters plan to dog torch bearers along the way. 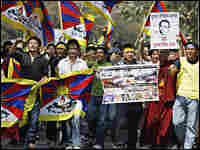 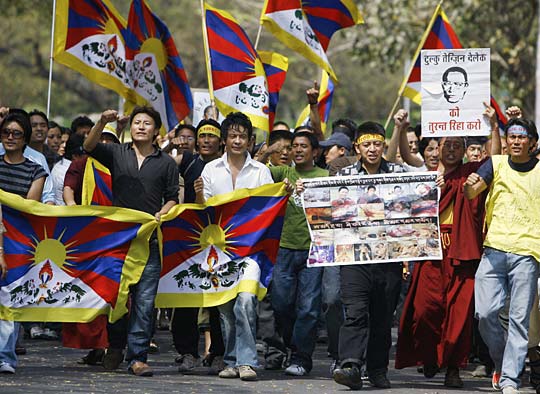 The crackdown in Tibet has attracted the kind of attention the Chinese government was hoping to avoid when it was given the chance to host the 2008 Summer Olympics.

On Monday, the iconic symbol of the Games — the Olympic flame — begins an 85,000-mile journey across five continents. And human-rights protesters say they plan to dog torch bearers along the way.

John Hoberman of the University of Texas has been tracking the mix of politics and Olympics for decades and says the Beijing Olympics could be shaping up to be "the most politically tumultuous Olympics in Olympic history."

That's quite a prediction, given the boycotts of the 1980s, the terrorist attack in Munich, and the Berlin Games organized by Adolph Hitler.

But Hoberman has been monitoring the news this week about demonstrations in Tibet and elsewhere, which included direct references to the Olympics — and calls for a boycott.

Despite such talk, the countries with the biggest Olympic teams say they will still send athletes to Beijing. That includes Australia, the countries of the European Union, and the United States.

The White House and State Department try to tread a fine line, calling on China to respect human rights, but insisting politics is not an Olympic sport.

"We view this as a significant international sporting event. We're going to treat it as such," says Sean McCormack, State Department spokesman.

"We would also encourage China to make use of the fact that the world is watching this Olympics to put its best face forward."

The notion that the Olympics can transform host countries is part of what prompted the International Olympic Committee to hold the 2008 Summer Games in Beijing. But that idea doesn't work, says Olympic historian Hoberman.

"Pre-Olympic repression is more the rule as opposed to the Olympics promoting liberalization. So in this case, the bet on the Chinese as potential liberalizers staging a Games is not looking very good," he says.

The State Department underscored that point this week when it warned Americans attending the Olympics. Michele Bernier-Toth, with the department's Bureau of Consular Affairs, says that Americans' conversations and telephones could be monitored and their rooms could be searched without their knowledge or consent.

But Monday, the feel-good Olympic flame begins its five-month trek from Greece to Beijing. Human-rights activists promise to make it the most politicized torch relay ever.