When did you first hear about brackets? Not wall brackets, you understand. In this all-American case, bracket is the etymological footnote to March Madness, the way the teams are designated to play out the NCAA tournament.

Everywhere else where you have this arrangement, as in, for example, tennis or match-play golf, it's called a draw. Only in our NCAA basketball do we have ... brackets.

Why? I don't know. But insiders now actually refer to "bracketology," the study of brackets, rather like we used to have "Kremlinology," when experts would study where the members of the Soviet presidium were located on the reviewing stand at the May Day parade.

What a shame. March Madness started out as the most homely, grassroots of our national championships. After all, it's divided up into regionals, and, quaintly, regional is really a word borrowed from high-school tournaments.

The NCAAs really was just sort of a giant high-school championship for colleges. For decades in the NCAAs there were the East, West, Midwest and Mideast regionals. I never heard the word "mideast" ever otherwise applied in America. It always sounded like Tel Aviv State and Amman A&M and Damascus Tech were going to play in the Mideast Regional.

They've changed the title of the old Mideast to the South, though. And never mind. Once the NCAAs became basically a television show and started sending teams every which a-way, geography got all blurred anyhow.

It used to be that if, for example, you were an Eastern team, you played in — guess what? — the East Regional. Now Florida is top seed in the Midwest, Ohio State in the South. Is the NCAA smarter than a fifth grader?

Sadly, March Madness is more like March Methodology now. Almost all of the at-large spots are assigned to also-ran teams in the big-money conferences who control the NCAA. Even teams that finish as low as eighth in a conference are invited in. Come on — fifth, sixth, seventh, eighth place, you make the playoffs? No.

I'd trade that whole ordinary bunch just to see what little Drexel could do against the big boys. But Drexel doesn't have pedigree.

But the NCAA and the bracketologists just worship their own skewed numbers. It's now a tournament run by accountants to please the fat cats. It's affirmative action for the powerful — March Mediocrity — like a rich child's birthday party where everybody gets a present.

They've forgotten that it's the charm, the mystique, the surprise factor that once made the NCAA so fun and special. 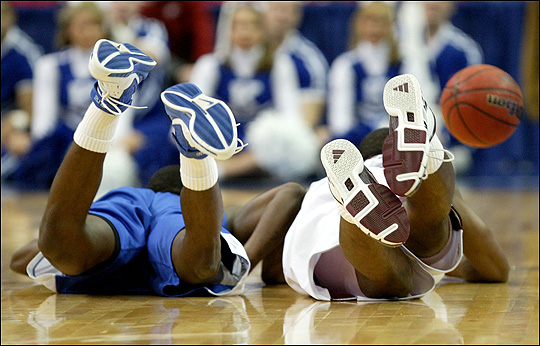 Yep, it's time to dive right into March Madness.

At this year's NCAA men's basketball tournament the biggest surprise has been a lack of really big surprises.

After all, upsets are what make the spectacle so much fun — and office pools such sweet agony.

But as the Sweet 16 took shape this weekend, some underdogs began to bark a bit.

Sunday saw a No. 2 seed fall as No. 7 seed UNLV pounced on Wisconsin, 74-68. The Badgers were briefly the top-ranked team in some of the regular-season polls before injuries and two late losses to Ohio State showed their vulnerability. They are now the highest-rated team bounced from the tournament.

Saturday — as several games went into overtime — it took two extra sessions for No. 6 seed Vanderbilt to polish off No. 3 seed Washington State, setting up a future date with Georgetown in the Meadowlands.

And let's not forget Butler and Tennessee. The No. 5 seeds handled No. 4 seeds Maryland and Virginia, respectively, to earn the chance for much bigger targets: No. 1 seeds Florida and Ohio State.

Meanwhile, the Winthrop Eagles — who many felt might fly high in this tournament — were grounded by a no-less majestic bunch of birds Sunday. Winthrop, a No. 11 seed, lost 75-61 to the Fighting Ducks of Oregon, a No. 3 seed.

No. 9 seed Xavier coulda, shoulda and woulda beaten No. 1 seed Ohio State. But the Muskateers left a tiny little window open for the Buckeyes after holding an 11-point lead late in the second half. After sending the game into overtime with a 3-point shot, OSU overpowered its deflated Ohio rival in the extra period to win 79-71.

In other near-upsets, No. 11 seed Virginia Commonwealth roared back from 19 points down to take No. 3 seed Pitt into overtime before the favored Panthers advanced. And No. 6 seed Louisville came within a basket of knocking out No. 3 seed Texas A&M.

Even so, this tournament is as short on stunners and shockers as any in recent memory. Only five of the 32 first-round games defied the bracket-makers' expectations.

So on to Sunday, where the game carrying the most potential for bracket-busting features No. 11 seed Winthrop testing its mettle against No. 3 seed Oregon.

Now, take a last look at the Davids — and the Davidsons — who showed up, slingshots in hand, hoping to knock a Goliath or two upside the head: