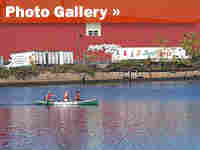 Watch: The scene of a forgotten natural disaster
Laura Silver/NPR

Nineteen years ago, the Exxon tanker Valdez bled 11-million gallons of oil into Alaska's Prince William Sound. And although the incident remains the largest single oil spill in North America, an underground plume in New York City is actually much bigger.

With at least 17-million gallons of oil — much of it traced to ExxonMobil — the spill underneath and around the city's Newtown Creek is half a century old. The historically industrial waterway separates the Greenpoint neighborhood of Brooklyn from the Long Island City neighborhood of Queens. Environmental investigator Basil Seggos says calls to force a cleanup there are building, but they pale in comparison to world outrage in response to the Alaska disaster.

The numbers are sobering. Seggos, chief investigator for the environmental group Riverkeeper, describes the mess under Newtown Creek as the result of a hundred-year legacy of intense pollution. He notes that the Coast Guard didn't formally note the slick until 1978.

Last year, in a move that may support pending lawsuits, Seggos says a report from the Environmental Protection Agency suggested the Newtown spill could be as much as three times larger than the Exxon Valdez disaster.

Seggos says the Newtown spill didn't happen in a dramatic fashion like Valdez one. Instead, it was a long, steady drip, he says. "You didn't have a drunken skipper running a huge ship up onto the rocks. You had years, decades of negligence, small leaks, small spills here and there that add up to the 17-million gallons. So there's 55 acres, which is about 55 football fields of oil right now under Brooklyn," he says.

He says Riverkeeper stumbled upon the spill in 2002 when they were patrolling New York harbor looking for people taking fish out of the water on a regular basis, for food. "We took our boat up the creek, and came upon the entire creek, basically, hundreds of yards long and as wide as the creek, coated with half an inch of oil," he remembers.

He points to two private lawsuits, with 700 co-plaintiffs, in addition to a very aggressive federal case led by New York State Attorney General Andrew Cuomo. Residents have sued ExxonMobil, Chevron and BP. Though cleanup has begun, Seggos says activists' and plaintiffs' essential complaint is that the oil interests are treating the spill as a chance to recover lost product, not an opportunity to repair a damaged area.

Seggos says the main issues for residents are soil contamination, ground water contamination and vapors that are moving through the soil up toward homes. "These are the things that aren't being dealt [with], and that's why we filed our federal case to really force an aggressive cleanup," he says.