Accessibility links
In Birmingham, Everyone Has Keys to the City Residents of Birmingham, England, awoke recently to find pianos spray-painted with the words "Play me I'm yours" scattered across the city. It's the work of an art collective that wants to create unity and wonder in a place where both are scarce.

Listen
In Birmingham, Everyone Has Keys to the City 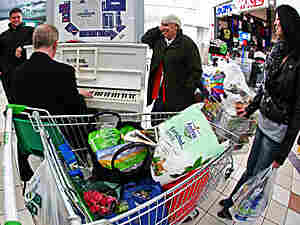 A man plays the piano at the One Stop Shopping Centre in Birmingham. Chris Keenan hide caption

The streets of Birmingham, England, are sounding a more joyful note these days. Residents awoke recently to find pianos spray-painted with the words "Play me I'm yours" scattered across the city.

The public invitation to tickle the ivories is the work of an art collective whose organizers say they want to create a sense of unity and wonder in a place where both are in short supply. Luke Jerram, the artist who conceptualized the project, previously surprised residents with an orchestra suspended in hot-air balloons over Birmingham.

On this particular morning, street musician Gurdan Thomas pounds on a battered, paint-spattered upright piano, just outside the city's rag market. He is accompanied by people on guitar and homemade drum.

As the trio plays, hijab-wearing women walking arm in arm and young mothers with babies bundled up against the cold slow to take in the spectacle. Men working the nearby stalls, and others clearly not working at all, loiter in groups and listen — and smile.

At any given moment, 15 such scenes play out across the city.

Kevin Isaacs, of Birmingham's Fierce art collective, commissioned the piano project. "We've had kids of 14, 15 years of age from all communities making their own types of music," Isaacs says. "We've had people of 70, 80 years old playing old music-hall-type stuff — which is absolutely brilliant, that's exactly what it's about."

One of the pianos was installed at Frankey Community High School, and librarian Sue Baker says she is thrilled with the number of people who sit down and play.

"It's getting people talking who you wouldn't normally talk to. And the people that you can't imagine, play," Baker says.

Outside the Allens Croft Primary School, fifth graders Simran Sahota, Robert Corcoran, Dailan Korta and Bethany Basnick crowd around one of the pianos. Since its arrival, it has been painted a dazzling pink and gray, and all the black keys have been covered in sequins, pom-poms, buttons and even pencil shavings.

"We came to school and it was all broke, so we took all the things off and we're taking 'em into class and everyone's decorating it," says Basnick. "And then we started to paint all this and stuck everything on so it looks all nice."

Corcoran notes that boys and girls have taken to the piano. "I think it's fun. ... In case we can't play football or anything, we can come down here and play the piano," he says.

Back at the rag market, Jason Konciw strikes some keys and shakes his head at the sound of the piano, which has suffered from sitting outside during a cold and wet month.

Like so many others in Birmingham, he is unemployed. The city's jobless rate is at least double the national average, and in some neighborhoods, one in three men has never had a job.

A few feet away, 72-year-old Katie Killen sits bundled up in a beach chair, surrounded by brightly colored roses and chrysanthemums at a flower stall where she's worked for 47 years.

She says the music "cheers the place up. ... We need cheering up."