Accessibility links
In Lionel Loueke, African Pop Meets Jazz He's one of New York's top jazz guitarists, but Lionel Loueke grew up in the West African nation of Benin. Since he left, he has forged a unique sound which draws from the traditional music of his youth.

From the album Karibu: 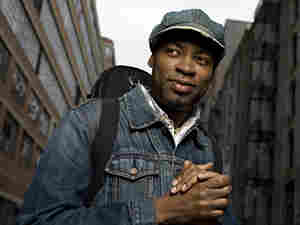 But Loueke grew up in what he describes as a family of poor intellectuals in Benin, a small country of subsistence farmers in West Africa. And when he left West Africa to study jazz, he took with him the music of the region.

Loueke has since forged a unique sound, captured on a new CD called Karibu, his highest-profile release to date. Loueke recently brought his guitar to NPR's New York bureau to demonstrate his original style with a solo performance.

"I grew up listening to traditional music from Benin, and I was playing percussion, too, around 9 or 11 until 17, pretty much," Loueke says. "My older brother was playing guitar, so I started playing guitar when I was 17... playing what we call African pop."

But when a friend of his brother's brought a George Benson album with him from Paris, Loueke's musical interests and life started moving in a new direction.

"I didn't know what he was doing," Loueke says of Benson. "I didn't even know it was improvisation. All I knew was that it was something I would love to do."

At age 16, Loueke went to study classical music history in Ivory Coast. He had so little money, he says, he got kicked out of his room for not paying the rent. Desperate for some kind of paying work, he went to a club, grabbed the band's guitar while it was on break, and started to play.

Before the band could grab it back, the manager offered him a gig. He held it for two years.

From Ivory Coast, Loueke went to study jazz in Paris, and then got a scholarship to the Berklee School of Music in Boston. After two years in Boston, he auditioned for a spot at the Thelonious Monk Institute of Jazz in Los Angeles, in front of jazz greats Wayne Shorter, Terence Blanchard, and Herbie Hancock.

"I flipped," Hancock says on a video about Loueke. "I'd never heard any guitar player play anything close to what I was hearing from him.

"The scope of the choices he made expressing himself," Hancock adds. "It was as though there was no territory that was forbidden. He was fearless."

Loueke's unique sound fuses traditional African music with modern jazz harmonies, unique vocal inflections, and complex time signatures. Take, for example, "Madjigua," an original composition which he performed alone in the studio. Before he started playing, he asked for some paper, which he threaded through his guitar strings near the bridge to get a buzzy sound.

The song sounds very traditional. But if you were having trouble following the groove, that's because it's in the exotic meter of 11 beats to a bar.

When he's not playing or traveling, Loueke practices often. He says that he and the rest of his trio, bassist Massimo Biolcati and drummer Ferenc Nemeth, can work together for many hours every day.

But all that work is paying off. Loueke's great musical breadth and technical ability has resulted in a very busy schedule of guest appearances. Along with his own trio, he also plays in Herbie Hancock's band. And he's played with a who's-who of big jazz names, not to mention African pop star Angelique Kidjo, a fellow Beninese New Yorker.

"You know, every time I do a gig with different musicians, I learn something," Loueke says. "I just want to be a musician, not a specific musician that can play only one style of [music]."

On his new album Karibu, his first for jazz label Blue Note, Loueke's compositions grow from his African roots but quickly stretch and spread into complex guitar voicings, harmonies, and meters. The result, however, does not come off as a dry musical exercise. The songs feel like a fresh, organic amalgam of a well-traveled musical life, performed by someone who's put in the time to become a master of his instrument.