Accessibility links
Ides of March After-Party: Roman Drinking Songs? : Krulwich Wonders... On March 15, 44 B.C., Julius Caesar was murdered by a posse of Roman senators. On the 2050th anniversary of the killing, we imagine a raucous "Apres Slaying Party" hosted by Brutus. Perhaps the senators broke into "99 Bottles of Beer on the Wall"… in Roman numerals? 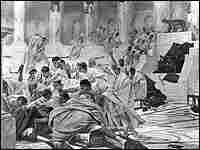 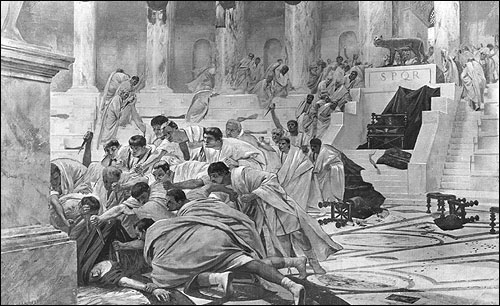 An 18th-century painting depicts the assassination of Roman dictator Julius Caesar on March 15, 44 B.C. Today, the question remains: How did the senators celebrate?

On March 15, 44 B.C. Julius Caesar was murdered by a posse of Roman senators. Today, on the anniversary of the historic murder, we imagine the sort of after-party the killers might have thrown.

What if 2050 years ago — or 2051, depending on how you count — on March the 15th, the Ides of March, the senators who killed Julius Caesar decided to throw a little party... just to celebrate the elimination of a potential dictator?

One could imagine a gaggle of Roman senators down at their local watering hole ordering mugs of beer, or more likely, wine.

Think of it as an Apres Slaying Party.

Now imagine them a little tipsy, singing what Roman senators no doubt were singing 2,000 years ago: that old drinking ditty, "99 Bottles of Beer (or Wine) on the Wall."

But remember, they were singing before the numbers we use — 26, 44, 58 — were invented. Our numbers are of Arabic derivation. Romans, we think, used numerals — like VII, IX, XVIII.

So instead of "99 Bottles of Wine on the Wall," it would be:

And if one of those bottles should happen to fall,

That leaves XCVIII bottles of wine on the wall...

What Did They Really Say?

An exercise like this does make you wonder: When Romans made numerical references in colloquial Latin, what did they actually say?

If you were a Roman senator with a 16-year-old son, would you have said, "Hey, come and meet my kid. He's one-six"?

I don't think so. So what did the Romans say?

Nobody we talked to seemed to know.

What happened when the Romans finished the last bottle of wine and came to the final line of the song?

"Zero" wasn't used as a number when Caesar was around. It became a symbol for "none" or "nothing" a little later.

Ancient mathematicians had a problem using a number for something that was not numerous. And that's why we don't end our song. It just goes... nowhere.

What If We Still Talked Roman?

And finally, since this is a "What if" story: What if Roman numerals had worked their way into our language?

NPR's Mike Pesca helped me think of some of the things we'd be saying:

"My daughter? She can't talk right now. She's getting ready for her Sweet XVI party..."

"Oh, that Lionel Richie when he was with the Commodores? Who will ever forget his "I..II..III Times a Lady..."

"Unless you prefer the rapper L Cent singing In Da Club, where it is XVIII to party and XXI to drink."

And can you imagine your Social Security number in Roman numerals?

That would never happen.

Special thanks to Josh Kurz of Los Angeles whose other work can be found at a Web site he shares with his friend, Adam, from Brooklyn.