Accessibility links
Timeline: Behind the Firing of Eight U.S. Attorneys The Bush administration announced in December that it was replacing several federal prosecutors. The Democratic-controlled Congress has had hearings into whether the dismissals were politically motivated. Political furor has ensued. Follow events so far.

In response to congressional inquiries, the Department of Justice released a series of internal communications — including e-mails with White House staff — that preceded the firings of eight U.S. attorneys. 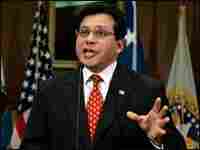 At a March 13 news conference, Attorney General Alberto Gonzales admits that "mistakes were made" in the Justice Department's handling of the firings of eight U.S. attorneys. Mark Wilson/Getty Images hide caption

The Bush administration fired seven U.S. attorneys on a single day last December. After Democrats took control of both chambers of Congress in January, they began hearings into whether those dismissals — as well as an earlier one, in June 2006 — were politically motivated. Political furor has ensued. Follow events so far:

Jan. 9, 2005: Sampson e-mails Deputy White House Counsel David Leitch to suggest dismissing 15 percent to 20 percent of all U.S. attorneys, including those who are not "loyal Bushies." Sampson writes, "If Karl [Rove, the president's political adviser] thinks there would be political will to do it, then so do I."

February 2005: Harriet Miers, who has replaced Gonzales as White House counsel, suggests that all 93 U.S. attorneys be replaced.

Feb. 14, 2005: Gonzales is sworn in as attorney general of the United States.

March 2, 2005: Sampson e-mails Miers a chart, categorizing U.S. attorneys into one of three groups based on whether they have "produced, managed well, and exhibited loyalty to the President and Attorney General."

Sept. 23, 2005: Sampson becomes chief of staff to the attorney general

May 11, 2006: Sampson e-mails White House official William Kelley: "Please call me at your convenience to discuss ... the real problem we have right now with [San Diego U.S. Attorney] Carol Lam that leads me to conclude that we should have someone ready to be nominated on 11/18, the day after her 4-year term expires."

The Los Angeles Times reports that Lam's corruption investigation of Republican Rep. Randy "Duke" Cunningham has expanded to include another Republican congressman from California, Jerry Lewis.

Sept. 13, 2006: Sampson writes an e-mail to Miers, urging the administration to circumvent Congress in appointing replacement U.S. attorneys: "I strongly recommend that, as a matter of administration policy, we utilize the new statutory provisions that authorize the AG [attorney general] to make USA [U.S. attorney] appointments ... we can give far less deference to home-state Senators and thereby get (1) our preferred person appointed and (2) do it far faster and more efficiently, at less political cost to the White House."

The Justice Department adds Iglesias to a list of U.S. attorneys slated for dismissal.

Nov. 15, 2006: Sampson e-mails Miers, copying Deputy Attorney General Paul McNulty on the message. Sampson writes, "I am concerned that to execute this plan [firing seven U.S. attorneys simultaneously] properly, we must all be on the same page and be steeled to withstand any political upheaval that might result. If we start caving to complaining U.S. attorneys or Senators, then we shouldn't do it — it'll be more trouble than it's worth."

Jan. 18, 2007: Gonzales testifies before the Senate Judiciary Committee: "I would never, ever make a change in a United States attorney position for political reasons, or if it would in any way jeopardize an ongoing, serious investigation." (Hear Gonzales' testimony.)

Feb. 23, 2007: Acting Assistant Attorney General Richard Hertling sends several members of Congress a letter saying, in part, "The [Justice] Department is not aware of Karl Rove playing any role in the decision to appoint Mr. Griffin."

March 6, 2007: Former U.S. attorneys testify before Congress. Some say they believe they were fired for political reasons.

March 9, 2007: Gonzales says he will not fight congressional proposals to undo the PATRIOT Act provision that gave him more authority to appoint replacement U.S. attorneys.

March 12, 2007: Justice Department officials say Sampson did not tell people at the agency about the extent of his communications with the White House. Sampson resigns as the attorney general's chief of staff.

March 13, 2007: The Justice Department sends documents to Capitol Hill detailing the correspondence between White House and Justice Department officials over the U.S. attorneys issue. Gonzales insists that he will not resign amid calls for his ouster. He cancels travel plans and holds a news conference to say, "Mistakes were made." He adds, "I never saw documents. We never had a discussion about where things stood." (Hear Gonzales apologize.)

March 14, 2007: President Bush says at a news conference in Mexico, "I do have confidence in Attorney General Al Gonzales." Mr. Bush says the firings were mishandled, and he's not happy about it. He says, "Al was right: Mistakes were made. And he's going to go up to Capitol Hill to correct them."

March 16, 2007: Sampson releases a statement through his lawyer saying that he did not resign because he failed to tell Justice officials the extent of his communications with the White House. Instead, he says, he resigned because he did not "organize a more effective political response" to the dismissals.

March 26, 2007: The Justice Department's White House liaison and senior counselor to Gonzales, Monica Goodling, says she will invoke her Fifth Amendment right not to respond to questions from Congress about the U.S. attorney dismissals.

March 28, 2007: The Justice Department says its Feb. 23, 2007, letter to Congress denying Rove's involvement in the U.S. attorney dismissals is "contradicted by Department documents."

March 29, 2007: Sampson testifies before the Senate Judiciary Committee. In response to questions about several of the attorney general's statements about the U.S. attorney dismissals, Sampson says, "I don't think it's entirely accurate."

Gonzales appoints Kevin O'Connor, U.S. attorney for Connecticut, as his chief of staff.