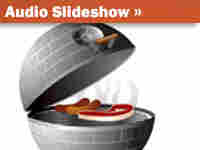 Watch: A catalog of rejected merchandise

Long, long ago, in a job far, far away, Jason Geyer had the opportunity to design merchandise for the new Star Wars "pre-quels" coming out. The idea was to create merchandise that stores could use for displays and giveaways.

But because Geyer worked not for Lucasfilm but for an independent company, he had to base his ideas on the original Star Wars trilogy. Geyer and a colleague, Steve Ross, decided to go for it — presenting plans for products ranging from a Death Star grill to Princess Leia headphones.

Some of their creations made it through, while others went the way of the Jabba the Hutt bean bag chair. Geyer recently stumbled across the rejected plans and blogged them on Action Figure Insider.

Geyer says he was one of the biggest Star Wars fans around — until he worked on this project. He was used to churning out promotional toys for cartoons and fast-food chains. "But when this came on, and it was Star Wars, it was really amazing," he says.

Ross says they started studying the characters and places in Star Wars, searching for inspiration, in a "Wouldn't it be cool if ..." process. Thus came the prototypes for the Han Solo refrigerator, with the hero frozen in carbonite on the front, and the Cloud City lamp all set for a bedside table — the stuff of the true fan's dreams.

On our blog, a listener challenge: Pitch your own ideas for Star Wars merch.