Accessibility links
School Helps Autistic Kids Navigate 'Foreign Land' At Croyden Avenue School — one of the few public preschools in the country to offer one-on-one counseling for autistic children — progress comes on many scales. With the teachers' help, Gibson Brown's family is learning to accept his slow, but steady, development. 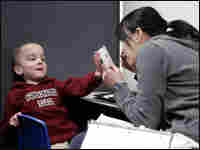 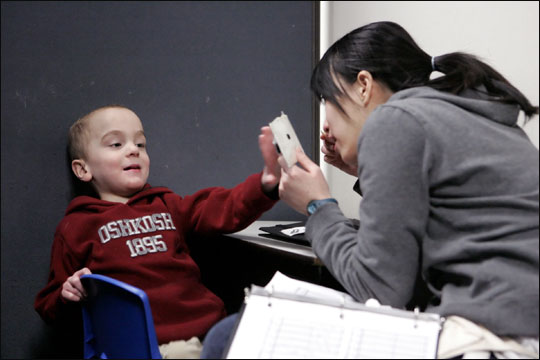 In Part I of this series, the Browns learn that their son has autism. 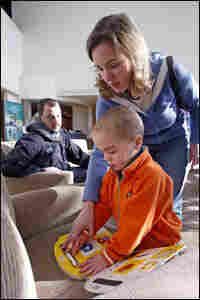 Katrina Brown says that watching her son Gibson learn is a bit like "watching grass grow." Her husband, Darrick, (back) watches her guide their son through a book. John Lacko for NPR hide caption 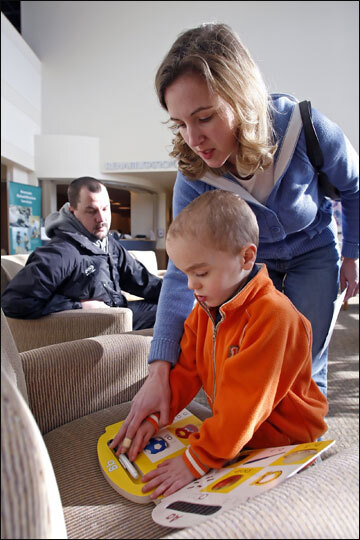 Katrina Brown says that watching her son Gibson learn is a bit like "watching grass grow." Her husband, Darrick, (back) watches her guide their son through a book.

When Gibson Brown learned how to put on his socks, his mother was ecstatic. Watching her autistic son develop, she says, is a lot like "watching grass grow." Such a step was almost like an entire tree had shot from the earth.

Until, that is, she went over to her sister's house and watched, stunned, as her niece — younger than her own son — put on her socks, shoes and jacket in a snap.

For the parents of an autistic child, such comparisons can be dangerous. No one knows this better than the teachers at the Croyden Avenue School in Kalamazoo, Mich. Each day is filled with tiny steps and tons of repetition. Progress comes on many scales.

Croyden is also a rather unusual place in that it's a public school that offers one-on-one intensive counseling for autistic children. Done privately, such therapy could cost families up to $100,000 a year.

On a recent morning, Katrina Brown is filled with many hopes and fears as she drops her son off at Croyden.

"He will do smart things," she says. "He figures things out on his own. It's not that I expect an Einstein or whatever. It just makes me really worried when I see how far he still has to go."

The school is prepared for children facing a unique set of hurdles. The classroom is filled with nearly soundproof cubicles to minimize visual and verbal distractions. Children are encouraged to play before starting on work to get to know their environment.

Many of the children aren't talking when they arrive at school. The earlier they learn to speak — rather than use behaviors to convey what they want — the better, says Angela Telfer, the principal of the school.

"If you can imagine going though life not understanding what people are saying to you and not being able to communicate how you are feeling, it can be a really scary place," she says. "It almost seems like you are dropped in a foreign land."

Teachers focus on small steps and try to develop lesson plans that take into consideration each child's strengths, weaknesses, likes and dislikes.

Gibson, for example, is drawn to the toy train, so his teacher frequently uses this as a tool.

Katrina Brown is learning to accept that progress is relative.

"I am learning to just appreciate him for who he is and the miracle he is ... he's really had to work so hard. So when you think about it that way, he is doing pretty good."

More in the Autism Chronicles

In Part II of this series, the Brown family takes Gibson to a special school. There, he begins to show signs of progress and his parents learn that success is relative. 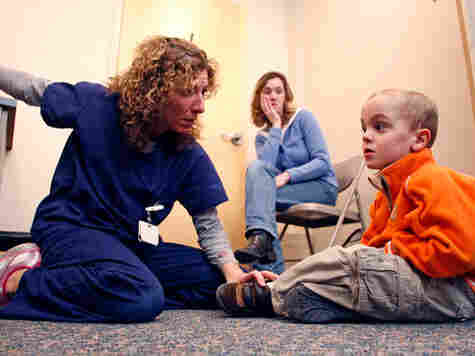 Throughout Gibson Brown's early years, his parents sense there is something off, but they can't pinpoint what. Doctors aren't much help. Then, an insightful Santa Claus suggests that it might be "that autism thing."

No way, his mother Katrina thinks, comparing her peaceful child with the kicking, screaming version of the disease she's extracted from movies. When a renowned doctor confirms Santa's suspicions, however, the Browns react in a surprising way.