Accessibility links
China Struggles to Shine in Olympic Spotlight China hopes to impress the world when it hosts the Summer Olympics in August. But Beijing faces pressure to improve human rights and deal with concerns about air pollution at the games. 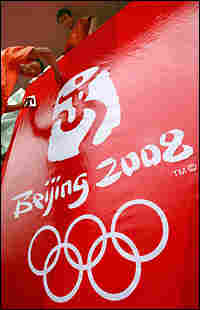 Workers install a billboard to mark the one-year milestone to the 2008 Olympic Games in Beijing, Aug. 7, 2007. Teh Eng Koon/AFP/Getty Images hide caption 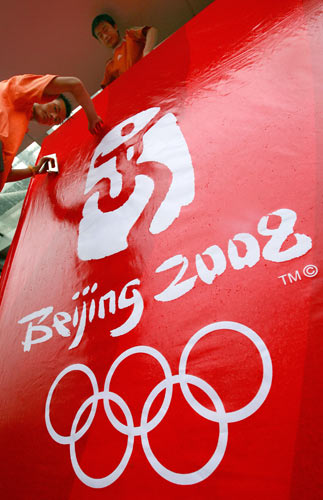 Workers install a billboard to mark the one-year milestone to the 2008 Olympic Games in Beijing, Aug. 7, 2007.

Olympics a Stage for Political Contests, Too

About this time, a few months before most every Summer Olympics begins, there is often a certain amount of anxiety. Usually, it relates to whether all the facilities will be constructed by the time the sappy opening ceremonies take place. But, invariably, everything comes together, and fellowship and brotherhood once again reign on earth.

It ain't gonna be that pat this time.

Oh, there's no problem with the construction in Beijing, but there is simply no assurance that the twin issues of pollution and human rights will be improved a whit by Aug. 8.

It isn't, either, that these problems have snuck up on the International Olympic Committee. Pollution and human rights were foremost in the conversation way back in 1993, when the IOC came within a hairsbreadth of awarding the 2000 Olympic Games to Beijing. Sydney got the nod then, but the twin bugaboos were no less front and center in 2001, when, yea, verily, the Olympic voters blessed Beijing with these games.

Jacques Rogge, the Belgian who chairs the IOC, surely knows that although there might be a little grandstanding, no nation is liable to be so bold as to boycott the games. China is simply too powerful economically for anybody to want to get on its bad side. And while a few athletes who suffer with pulmonary problems may decide not to compete — like the world record-holder in the marathon — the Olympics simply mean too much for most athletes to forego the main chance.

Besides, once the IOC awarded Beijing the Olympics, it lost moral suasion. The IOC could no more take back the games than the United Nations can stop China from providing subsidies to the Sudanese government, which helps to enable the carnage in Darfur. The actress Mia Farrow might have stung the Chinese by calling these games the "genocide Olympics," but life — and death — proceed apace in Darfur and Tibet. And dissidents and journalists remain behind bars in China, while on a typical day in Beijing, pollution levels may be as much as five times more than what the World Health Organization calls safe.

I know: Been there, gasped that.

Rogge, doing his best King Canute imitation, assures us that the pollution will miraculously roll back because the Chinese "are not going to let the world down." More cynically, Rogge is surely counting on the reality that once the fun and games begin, politics are always pretty much forgotten. The inability to breathe, however, is something that does tend to remain in the consciousness, and if visitors are gagging, they may not swallow the political abuses either.

The Chinese so wanted the Olympics as a way to show off their new power and prosperity. Wouldn't it be ironic, if, instead, the negative got accented, and even a little bit of the world's venom was directed away from the United States and toward China. Well, at least for a couple of weeks ...