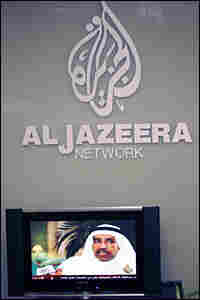 Al Jazeera was one of the first networks to broadcast in Arabic worldwide from inside Israel. This photo was taken in the network's West Jerusalem bureau. Eric Westervelt, NPR hide caption 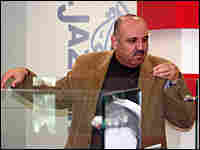 Al Jazeera, the Arabic TV news network, is facing a de facto boycott from the Israeli government, which calls the network a "tool of Hamas." In turn, Al Jazeera calls the boycott anti-democratic and an affront to basic press freedoms.

Twelve years ago, Al Jazeera created a stir when it began sending reporters to Israel. For decades, Arab media had largely boycotted Israel. Al Jazeera broke new ground and was the first Arab network that had Israelis on air.

"In the last month, they refuse to appear on Al Jazeera. They [are] trying to threaten us. Maybe they want us to change our coverage," Omary says.

The Israelis have given no official notice of a boycott, but the de facto policy has further strained relations between Israel's government and the news network that was one of the first to broadcast in Arabic worldwide from inside Israel.

Israeli officials today accuse the network of serving as a propaganda arm of the militant Islamist group Hamas, which Israel and the West list as a terrorist organization.

A senior Israeli official, who asked that his name not be used, said Al Jazeera's Arabic broadcasts have "become a tool of Hamas. They are working with Hamas to incite terror."

Areye Mekel, an Israeli foreign ministry spokesman, says if Al Jazeera broadcasts a pro-Hamas message for 24 hours a day, "two minutes of our spokesman will not really make a difference."

"It's used as a fig leaf, and we decided that for the time being, we're better off without it," Mekel says.

He says the government still talks to Al Jazeera's new English language news, but not the Arabic side. Mekel says the government's problems with the network grew during the recent Israeli military attacks inside Hamas-controlled Gaza following Palestinian rocket attacks on the southern Israeli town of Sderot and the port city of Ashkelon.

Al Jazeera showed gruesome pictures of dead Palestinian civilians inside Gaza, he says, without bothering to get the Israeli side or report the Gaza bloodshed in context.

Mekel also accuses Al Jazeera Arabic of staging part of its coverage of a power blackout in Gaza after Israel reduced electricity supplies to the territory earlier this year.

Al Jazeera's Omary calls the charges outrageous and wrong. He says Israel's shunning of the network is a dangerous infringement on freedom of press and speech.

Al Jazeera has faced official and unofficial boycotts and sanctions before. The U.S.-backed Iraqi government kicked Al Jazeera out of the country in 2004. In the past, the U.S. military in Iraq has detained Al Jazeera reporters and accused them of collusion with insurgents. Several authoritarian Arab governments, including Saudi Arabia, continue to ban the network's reporters from working inside their countries.

Omary charges that Israeli media consistently show a sanitized view of Gaza violence and too often, he says, become uncritical boosters for the Jewish state and its policies.

Meanwhile, a senior Israeli official confirms that the government is considering taking other punitive steps against Al Jazeera Arabic, including possible restrictions on visas and government press I.D. cards.