Accessibility links
'Cheese' Heroin Hooking Young Users in Dallas A cheap but highly addictive form of heroin known as "cheese" has swept through Dallas in recent years, and local health officials are seeing Hispanic children as young as 9 suffering from the crushing effects of withdrawal. 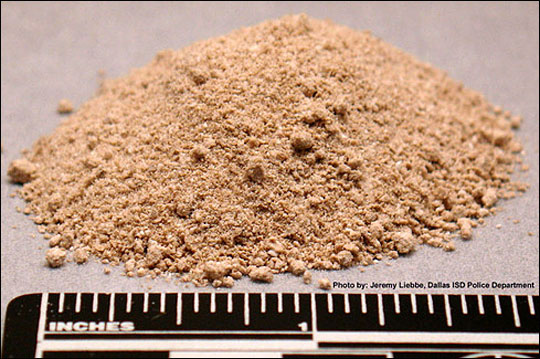 "Cheese" is Mexican black-tar heroin that has been diluted with crushed tablets of over-the-counter sleep medication.

In Dallas, health officials are seeing children that young being brought to hospitals with signs of heroin withdrawal. The city is in its third year of what drug abuse experts call a "mini-epidemic" among young Hispanics snorting a mild but addictive heroin called "cheese."

Cheese heroin is Mexican black-tar heroin that has been diluted with crushed tablets of over-the-counter sleep medication such as Tylenol PM.

Sniffing heroin is not particularly new, but addiction experts say this outbreak in Dallas is unprecedented. Typically, people who inhale heroin are older and they're white. In Dallas, however, users are mostly Latino, and they're young.

"Reports that we were seeing were pretty striking. Kids as young as 9 or 10 years of age coming to the hospital emergency rooms or detox facilities in acute heroin withdrawal," says Dr. Carlos Tirado, a psychiatry professor at UT Southwestern Medical Center and medical director of a drug treatment center in Dallas.

"We didn't know what to do with a 9-year-old in opiate withdrawal, or what the treatment ramifications of that are," Tirado says. "Do you send a 9-year-old to an AA meeting?"

A more typical user is 17-year-old Lizbeth. She is the daughter of immigrants from Juarez, Mexico, who moved to Dallas to get away from the border's violent drug culture. Lizbeth attends a public school in North Dallas with a large Hispanic population, and she says that sniffing cheese is commonplace there.

Dressed in a gray hoodie and hoop earrings, she sits on a couch at Phoenix House, a residential treatment center in Dallas.

"I thought that since it was used as sniffing I would, like, try to deny it. This is just cheese, it's not as bad as shooting it up," Lizbeth says.

She says she entered treatment — now for the second time — because she hates the withdrawal symptoms.

"I was tired of feeling my bones hurting. I was tired of headaches, cold sweats and all that," she says. "So I told my mom to bring me because I'm already gonna be 18 and I don't want to look at myself like being a junkie like some people I see in the streets. I don't want to be like them, I want to have a better life."

Cheese heroin was completely unknown in the United States until the first case was discovered at Thomas Jefferson High School in August 2005. Since then, Detective Jeremy Liebbe of the Dallas Independent School District Police Department says he has arrested and interviewed more than 300 users.

Liebbe learned that cheese costs only a dollar or two a line — well within a middle-schooler's lunch budget. And because cheese heroin is low-grade, only 1 percent to 3 percent pure heroin, it wears off quickly and withdrawal sets in. Heavy users require frequent hits.

"I'll wake up in the morning and I'm already hurting so I use some cheese. If I don't use by second period, withdrawal will kick in by third period. Then lunch, then sixth period, then immediately after school, then after dinner, then before bed."

Liebbe says those who are really bad off "are waking up in the middle of the night with withdrawal sickness."

Although some data show that young Hispanics in a handful of other Texas cities are increasingly inhaling heroin, experts say it's too early to call it a trend. But Robert Lubran, director of the Division of Pharmacologic Therapies at the federal Substance Abuse and Mental Health Services Administration, says the situation in Dallas is being closely watched.

"The concern is that the people who market these dugs are very savvy, and if there's profit to be made by moving to another community, we know they'll do that," Lubran says.

In Dallas, there have been eight overdose deaths from cheese heroin alone or in combination with other drugs in the past 2 1/2 years, according to the county medical examiner. However, there hasn't been a death since last July, and the county has formed a cheese heroin task force. Arrests of heroin dealers in schools and neighborhoods also are up, and there is an aggressive education program in the schools.

Liebbe says, "This is not a problem we can arrest our way out of."