Accessibility links
Garbage Mass Is Growing in the Pacific Plastic debris is being swept by Pacific currents into a somewhat stagnant area of ocean between Hawaii and Los Angeles, resulting in polluted area nearly twice the size of Texas that's growing every year.

Listen
Garbage Mass Is Growing in the Pacific 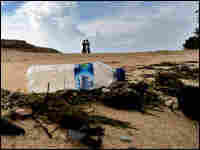 A plastic bottle on a beach on the Indonesian island of Bali. Jewel Samad/AFP/Getty Images hide caption

Capt. Charles Moore recently returned from his eighth trip to a remote corner of the Pacific Ocean. The trip, with the Algalita Marine Research Foundation, wasn't to a pristine beach, but to a huge plastic garbage mass — nearly twice the size of Texas — halfway between Hawaii and Los Angeles. Moore says it's getting bigger every year.

"It's a dispersed congregation of our debris from civilization, mostly plastic," Moore says. "It's breaking into small fragments. ... If it's calm it sort of looks like a giant salt shaker has sprinkled bits of plastic onto the surface of the ocean."

Moore reports curious finds such as hard hats, umbrella handles and tofu tubs. "In the current system that creates this vortex, it just so happens that debris from Asia arrives in about six months to a year, whereas debris from the west coast of the United States takes five years." It's not all from land, he says. "The figure we use is 80 percent land-based, 20 percent from ships at sea."

Why this particular area? To describe the confluence of factors centering the garbage, Moore conjures the image of a toilet bowl, in which the outer rim is being swept by a clockwise current. He says there's a giant circular pressure system, the North Pacific gyre, that is constantly dragging floating material to the center. "But it never flushes," Moore says. "It just keeps adding and adding."

If something isn't done, he says, the island will increase in size by a factor of ten every two to three years — making in time something more akin to an actual, solid island. "The consequence of putting that much stuff shading the surface of the ocean is unknown," he says. "We don't know the harm."

As for a technological solution, something like a fleet of ships to scrape up the mess, Moore is skeptical. "That's well intentioned, but the size and the fact that this material is mixed into the water column," he says. "You're talking five million square miles."

One way to address the problem, Moore says, is for each consumer to drastically reduce the amount of plastic they send out into the environment. "As responsible as we like to think we can be, given the huge amount of plastic packaging we have to wade through every day, and the tiny little bits and edges and parts of plastic packages that we have to tear apart to get at our goods, it's very difficult even for the most responsible consumer not to contribute to this ocean's plastic load."