Accessibility links
Warring Militants Threaten Iraq's Fragile Security Iraq may be facing the gravest challenge to its fragile security in more than a year. Shiite militiamen loyal to anti-American cleric Muqtada al-Sadr are fighting Iraqi government forces for control of Basra, and the violence has spread to Baghdad. Prime Minister Nouri al-Maliki says the militamen have 72 hours to lay down arms.

Iraq may be facing the gravest challenge to its fragile security in more than a year. Shiite militiamen loyal to anti-American cleric Muqtada al-Sadr are fighting Iraqi government forces for control of the southern city of Basra, and the violence is spreading to Baghdad.

Prime Minister Nouri al-Maliki, who went to Basra to run the Iraqi security forces' operation personally, said Wednesday morning that the militiamen have 72 hours to lay down their arms.

"He has a lot at stake, as this is the first Iraqi-led operation like this, and it is becoming a test as to how, and if, Iraqis can handle their own security," NPR's Dina Temple-Raston, who is in Baghdad, tells Steve Inskeep. Residents in Basra say the fighting between the Mahdi Army and Iraqi forces has been instense, with 38 killed and 134 wounded as of Tuesday, she says.

In Baghdad, Temple-Raston reports, armed Mahdi militiamen are openly out on streets for the first time in more than six months.

U.S. troops have gone into Sadr City, and residents there say intense firefights are going on. Cars and tires are burning. And 20 people were killed and 115 injured Tuesday in Sadr City alone. Al-Sadr has called on his followers to observe a nationwide strike, and shopkeepers who defy his order and open their businesses reportedly are getting shot.

The number of bodies being delivered to the morgue has doubled overnight. "The surge of U.S. troops brought a stop to a lot of the sectarian violence in Baghdad, and this jump in morgue numbers indicates that that gain might be slipping," Temple-Raston says.

"We're seeing larger numbers of bodies turning up, which means that these Mahdi Army tensions are leading to sectarian ones as well."

The violence is relatively limited compared with the situation a year ago, but there is a sense in the city that the violence could spread, she says.

Iraqi PM: Militants Have 72 Hours to Give Up Guns 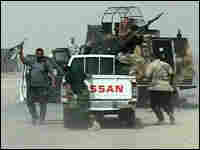 Iraqi Prime Minister Nouri al-Maliki on Wednesday issued a 72-hour deadline for militants in Basra to lay down their weapons after a second day of fighting left dozens dead and more than 200 wounded.

Al-Maliki arrived in Basra to supervise a crackdown against the violence spawned by militia factions who are vying for control of the center of Iraq's oil industry, which is located near the Iranian border.

Sadiq al-Rikabi, a chief adviser to al-Maliki, said gunmen who fail to turn over their weapons to police stations in Basra by Friday will be targeted for arrest. He added that they also must sign a pledge renouncing violence.

"Any gunman who does not do that within these three days will be an outlaw," he said.

More than 50 people have been killed and 300 wounded in Basra and Baghdad after clashes between Iraqi security forces and fighters loyal to Shiite cleric Muqtada al-Sadr spread to Baghdad's principle Shiite district of Sadr City.

During the past two days, the fighting between government forces and al-Sadr's followers has spread to other towns in southern Iraq where al-Sadr is influential. Officials fear a cease-fire that al-Sadr imposed on his Mahdi Army militia last August may completely unravel.

At least four Iraqis also were killed after at least two mortar or rocket rounds fell short in Shiite areas of Baghdad.

The resumption of intense fighting by the Mahdi Army militia is a threat to U.S. soldiers and the security gains that Washington, D.C., has hailed as a sign that Iraq is on the road to recovery.