Accessibility links
'21' A brilliant MIT student joins a professor and a group of mathematicians in a Las Vegas card-counting scheme. It's a sort of collegiate Ocean's 16, and it's sharp enough — even if the counting system, as explained (endlessly) in the film, is a bit complex. 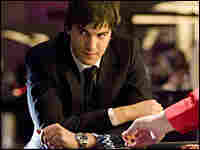 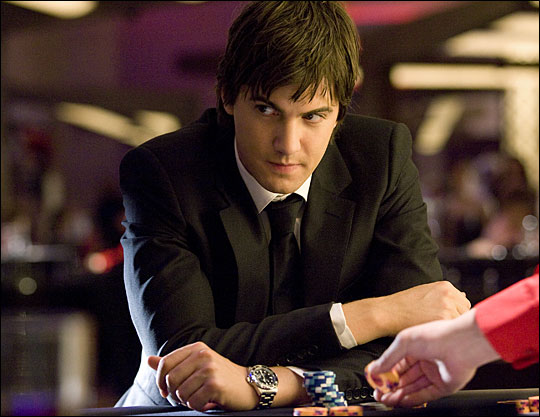 Ben Campbell (Jim Sturgress) is an MIT student counting cards in Las Vegas to pay for his education in 21.

Based loosely on a scheme concocted by MIT students to beat the blackjack odds in Vegas, this slick caper — a sort of collegiate Ocean's 16, with significantly less star power but only a touch less oomph — mostly comes up aces.

Jim Sturgess (Across the Universe) plays a boyishly brilliant math student who's importuned by fetching Kate Bosworth to join a clutch of card-counting brainiacs in a profitable little extracurricular sideline: Under the supervision of scenery-chewing Prof. Kevin Spacey, they fly to Vegas on weekends, identify hot tables and rake in the chips for a few days before heading back to classes on Monday.

Card-counting being frowned upon by the casinos, there are disguises and fake names involved, and casino enforcer Laurence Fishburn is on hand to lend a modicum of suspense. Presumably because director Robert Luketic knows that there's a limit to how exciting he'll be able to make the sight of cards being turned and chips being shoveled, much of 21 is taken up with the laying-out and explaining of a counting scheme that's going to go right over most moviegoers' heads.

Still, despite some credibility-stretching plot twists — and a romance with next to no chemistry — the film is probably sharp enough to keep its youngish target audience from wishing there were slot machines in the lobby to offer an escape.