Accessibility links
Card by Card, Stride by Stride, It's an Unthrilling Run Competition fuels both 21, about a college card-counter working Vegas, and Run Fatboy Run, about a shlub who runs a marathon for love's sake. But neither film takes the gold with NPR's critic.

Listen
Card by Card, Stride by Stride, It's an Unthrilling Run 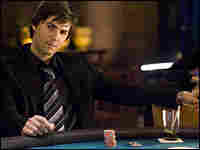 'Every Card Had a Value' 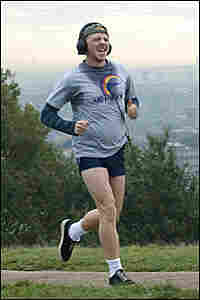 'You Decided to Run the Marathon?'

'I'd Settle for Your Respect'

Competition figures in two new movies — 21, about college students trying to beat the odds in Las Vegas, and Run Fatboy Run, which centers on a man trying to beat a romantic rival in a marathon. This being Hollywood, everybody wins — except maybe the audience.

At the outset of 21, a boyishly brilliant math student joins other collegiate brainiacs in an extracurricular activity. It involves the world's most popular card game — blackjack — and a card-counting scheme.

And for the next 90 minutes or so, counting cards is basically all they're gonna do, and though this "action" comes accompanied by much snapping of aces on green felt and many urgent electronic swooshes, the unfortunate truth is that our heroes are using a system that's basically impenetrable.

Now, I don't know, maybe all this is thrilling, and I'm just not getting it. Certainly there's an attractive young cast. And, card-counting being frowned upon by casinos, there are disguises involved, not to mention a certain amount of snarling from Laurence Fishburn and Kevin Spacey, which lends a bit of tension.

But because the director knows there's a limit to how exciting he can make the sight of cards being turned over, most of the film is taken up with explaining what's happening, or is going to happen, or has just happened. Which may be enough to keep audiences from heading for the nearest slot machine, but at best, 21 is a sort of collegiate Ocean's 16 — with dimmer stars and less oomph.

Run Fatboy Run, on the other hand, feels like a souped-up sitcom — which makes a certain amount of sense, as it's directed by former Friends actor David Schwimmer.

The premise? An out-of-shape security guard decides that the way to win back the bride he left standing pregnant at the altar is to compete in a London marathon against her rich new marathon-running American boyfriend. Simon Pegg is the runaway groom, Hank Azaria the long-distance interloper.

Now, Pegg is an appealing leading man, and he's been given a couple of sitcom-worthy sidekicks to help him through a training regimen that leads, inevitably perhaps, to much ado about blisters.

But Run Fatboy Run seems content to trot amiably past its plot points — and also past graceful leading lady Thandie Newton, who never breaks a sweat — to an overlong, overblown marathon finale with an over-prominent Nike plug.

For a movie about fleet-footed athletes, Schwimmer's direction is, well, pedestrian — but then it's not his fault that the material is kind of lame.