Accessibility links
Hollywood Veteran Richard Widmark Dies at 93 The actor made a sensational, Oscar-nominated 1947 film debut as a giggling killer in Kiss of Death and became a Hollywood leading man in Broken Lance, Two Rode Together and 40 other films. Death came after a long illness. 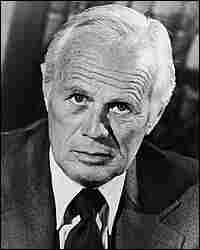 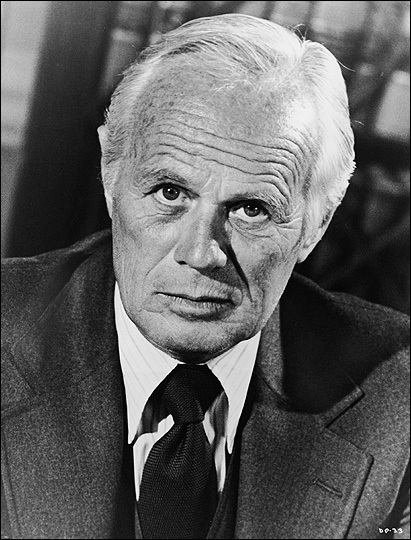 Richard Widmark, shown here in the early 1980s, was a fixture on film for nearly 50 years.

The Wheelchair Scene from 'Kiss of Death'
Widmark on 'What's My Line?' 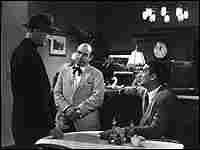 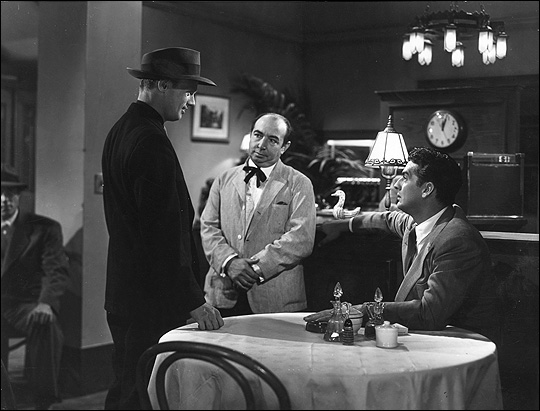 Richard Widmark, who made a sensational film debut as the giggling killer in Kiss of Death and became a Hollywood leading man in Broken Lance, Two Rode Together and 40 other films, has died after a long illness. He was 93.

Widmark's wife, Susan Blanchard, says the actor died at his home in Connecticut on Monday.

After a career in radio drama and theater, Widmark moved to films as Tommy Udo, who delighted in pushing an old lady in a wheelchair to her death down a flight of stairs in the 1947 thriller Kiss of Death. The performance won him an Academy Award nomination as supporting actor; it was his only mention for an Oscar.

"That damned laugh of mine!" he told a reporter in 1961. "For two years after that picture, you couldn't get me to smile. I played the part the way I did because the script struck me as funny and the part I played made me laugh. The guy was such a ridiculous beast."

"I know I've made kind of a half-assed career out of violence, but I abhor violence," he remarked in a 1976 Associated Press interview. "I am an ardent supporter of gun control. It seems incredible to me that we are the only civilized nation that does not put some effective control on guns."

Two years out of college, Widmark reached New York in 1938 during the heyday of radio. His mellow Midwest voice made him a favorite in soap operas, and he found himself racing from studio to studio.

Rejected by the Army because of a punctured eardrum, Widmark began appearing in theater productions in 1943. His first was a comedy hit on Broadway, Kiss and Tell. He was appearing in the Chicago company of Dream Girl with June Havoc when 20th Century Fox signed him to a seven-year contract. He almost missed out on the Kiss of Death role.

"The director, Henry Hathaway, didn't want me," the actor recalled. "I have a high forehead; he thought I looked too intellectual." The director was overruled by studio boss Darryl F. Zanuck, and Hathaway "gave me kind of a bad time."

An immediate star, Widmark appeared in 20 Fox films from 1957 to 1964. Among them: The Street with No Name, Yellow Sky, Panic in the Streets, and the Samuel Fuller film noir Pickup on South Street.

In 1952, he starred in Don't Bother to Knock with Marilyn Monroe. He told an interviewer in later years:

"She wanted to be this great star but acting just scared the hell out of her. That's why she was always late — couldn't get her on the set. She had trouble remembering lines. But none of it mattered. With a very few special people, something happens between the lens and the film that is pure magic. ... And she really had it."

After leaving Fox, Widmark's career continued to flourish. He starred (as Jim Bowie) with John Wayne in The Alamo, with James Stewart in John Ford's Two Rode Together, as the U.S. prosecutor in Judgment at Nuremberg, and with Robert Mitchum and Kirk Douglas in The Way West.

He also played the Dauphin in St. Joan and had roles in How the West Was Won, Death of a Gunfighter, Murder on the Orient Express and Coma.

Madigan, a 1968 film with Widmark as a loner detective, was converted to television and lasted one season in 1972-73. It was Widmark's only TV series.

Widmark was born Dec. 26, 1914, in Sunrise, Minn., where his father ran a general store, then became a traveling salesman. The family moved around before settling in Princeton, Ill.

"Like most small-town boys, I had the urge to get to the big city and make a name for myself," he recalled in a 1954 interview. "I was a movie nut from the age of 3, but I don't recall having any interest in acting," he said.

But at Lake Forest College, he became a protege of the drama teacher and met his future wife, drama student Ora Jean Hazlewood.

In later years, Widmark appeared sparingly in films and TV. He explained to Parade magazine in 1987: "I've discovered in my dotage that I now find the whole moviemaking process irritating. I don't have the patience anymore. I've got a few more years to live, and I don't want to spend them sitting around a movie set for 12 hours to do two minutes of film."

When he wasn't working, he and his wife lived on a horse ranch in Hidden Valley, Calif., or on a farm in Connecticut. Their daughter Ann became the wife of baseball immortal Sandy Koufax.