Accessibility links
Clashes with Militants Test Iraqi Security Forces Intense negotiations are under way to end fighting between Shiite militiamen and government forces in Iraq's southern oil hub of Basra, as well as in Baghdad. The fighting, kicked off by the Iraqi prime minister's decision to go after militias in Basra, has high stakes for both Iraq and the U.S. 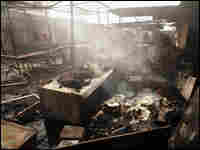 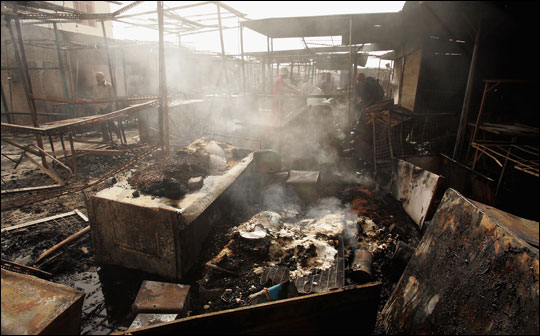 A market burned during clashes between Mahdi Army fighters and Iraqi forces in the impoverished Shiite district of Sadr City in Baghdad. 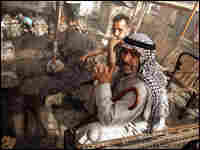 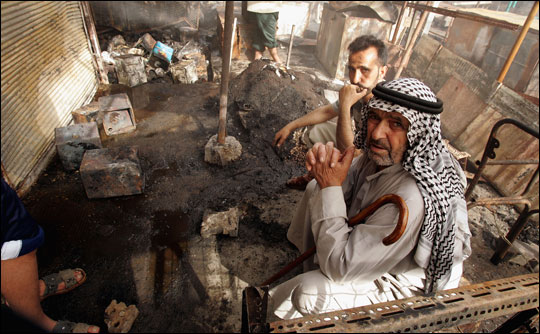 Iraqis sit in a market burned during fighting between Shiite militiamen and Iraqi security forces in Sadr City.

Intense negotiations are under way to end fighting between Shiite militiamen and Iraqi forces in the southern oil hub of Basra and in Baghdad. Iraq's prime minister has given gunmen in Basra three days to hand over their weapons.

More than 60 people have been killed and hundreds wounded after the violence that broke out early this week in Basra spread to the capital's vast Shiite slum of Sadr City.

The clashes in Sadr City continued Wednesday. Ali Mohammed, who lives in the area, told NPR by phone that the Mahdi Army, controlled by Shiite cleric Muqtada al-Sadr, was defending its territory. The crack of gunfire and the whistle of mortar rounds resounded as he spoke.

"The streets are filled with roadside bombs," Mohammed said. "They set them between 15 and 30 feet apart, and they even placed them on the sidewalk. I saw more than 25 roadside bombs in my area."

He said residents of Sadr City are bracing for the worst.

"They are scared," Mohammed said. "All the markets are closed, and we don't have water or electricity since yesterday. We are being punished. All the police who lived in Sadr City have run away."

That effectively leaves the Mahdi Army in control. American troops have formed a ring around the area, but the U.S. military has made a point of saying it has not yet entered Sadr City.

Several other neighborhoods in Baghdad also have reported fighting between the Mahdi militia and Iraqi police and army forces. Clashes also have broken out in the southern cities of Kut, Hilla and Diwaniyah, despite curfews imposed.

The current round of violence was sparked by Iraqi Prime Minister Nouri al-Maliki's decision to take on the militias in Basra.

Seen as unpopular and weak, Maliki is personally overseeing the operation in Basra, and he has staked his political capital on its success.

Coalition forces have been providing air support and intelligence, but the offensive is the first real test of the Iraqi security services.

The stakes are high for the United States, as well. If Iraq's forces do well, it could pave the way for more withdrawals of U.S. troops. If they do poorly, it will be proof that Iraq is not ready to stand on its own.

"This has been a difficult and challenging few days," said U.S. military spokesman Maj. Gen. Kevin Bergner. He distanced U.S. and British forces from the operation.

"It is important to note that these operations have been undertaken by the Iraqi security forces based on decisions and direction of the prime minister with his national security ministers," Bergner said, calling it a "completely Iraqi initiative."

Sheik Mohammed Azzedawi, a tribal leader, spoke to NPR by phone from a Basra neighborhood that is a Mahdi stronghold. "Until now, the fight has been continuous, but the Iraqi army has failed to enter our neighborhood," he said.

He said government forces have been repulsed, for now. But the Iraqi military said the operation against the militants is going well.

The Mahdi Army — one of the most well armed and feared groups in Iraq — had agreed to a unilateral cease-fire seven months ago. That accord is now in danger of collapse.

And the militia, made up of fighters loyal to the anti-American al-Sadr, seems to be a house divided.

One senior Mahdi Army commander said the cease-fire is still in effect, and he blames Iraq's security forces for the current impasse.

"The orders we have are simple," the commander, Abu Mujtaba, said by phone. "It is a civil disobedience campaign. People should not go to work, and the strike will bring attention to our requests. The security forces reacted badly and destroyed the original idea."

He added that al-Sadr is trying to calm the situation.

In Sadr City, though, members of the Mahdi Army rank-and-file said they were in a struggle for their very survival. They said the Maliki government is trying to wipe them out ahead of provincial elections in October. The Sadrists boycotted elections in 2005, leaving rival parties with control of key areas in the south.

They believe the current Iraqi offensive is aimed at weakening them ahead of the crucial vote this fall.