Accessibility links
German Left Courts the Working Class A new political party in Germany has made saving the working class and the country's welfare system rallying points for attracting votes. Die Linke, or the Left Party, is drawing support from mainstream parties with a radical message.

Learn how the Left Party is reshaping German politics. 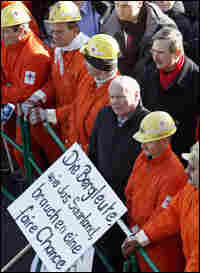 A new political party in Germany has made saving the working class and the country's welfare system rallying points for attracting votes. It has been drawing support from the mainstream parties with a radical message.

The party, Die Linke, or the Left Party, is a merger of the reformed Communist Party from East Germany and discontented former Social Democrats. One of its co-leaders, Oskar Lafontaine, says that Germany shouldn't turn its back on working people just as they are increasingly struggling to make ends meet.

Lafontaine, who has electrified crowds of supporters with his speeches and has written numerous political books, says that current German policies benefit corporations, allowing the rich to accumulate wealth while welfare benefits are being cut.

"That's immoral," he told a recent gathering of miners and their families in western Germany. "Higher income people have to contribute their fair share."

It's a message that's resonating with Germans who are casting their ballots for the far left in bigger and bigger numbers. This message is also drawing supporters from all regions of Germany who are upset with changes to the social welfare and tax systems, which critics say have hurt the poor while benefiting the well-off. Some politicians say the changes are needed to help Germany stay competitive in the global market. But many Germans are critical of the impact these changes will have on the working class and the poor.

"Globalization as it's happening now means that a small few are calling the shots all over the world, and they're forcing their way on everyone else. Capital is the driving force," says Marlis Kramer, one of the Left Party's new members. "Oskar Lafontaine is the one who has the courage to stand up to capital."

For 25 years, Kramer was a member of the Social Democrat Party and also served as a city councilor. But she left her one-time political home because of its move to the center; she says she wants to support a party with an alternate vision for Germany.

Johannes Kahrs, a Social Democratic member of parliament, has watched the Left Party drain support from his party's base.

"They see that many things are going in the wrong direction — like companies [that] are making huge profits, laying off people at the same time, [and] the CEOs get a pay rise of 30 to 40 percent," says Kahrs.

He says many Germans view these kinds of practices as a betrayal of the social market model that Germany adopted after World War II — when government, business and unions joined forces to rebuild the country's battered economy.

The Left Party's vision for society includes higher taxes for corporations, a wealth tax, re-nationalizing some privatized companies, and boosting welfare and jobless benefits. The party also wants to end all of Germany's military missions abroad.

Critics say Die Linke and Lafontaine are making promises that they could never keep and that are dangerous for Germany's economy and its relationship with allies.

On the streets of Saarbrucken, where Lafontaine used to be mayor, there's a lot of discussion about the Left Party.

"There's a yearning for a clear, understandable message and vision and that has helped the Left Party. With simple language, they connect with everyday people and offer protection against globalization," says 48-year-old Bernd Thomas who was shopping in this German city on the French border.

"They're a good pinprick for the establishment, but I wouldn't really want to see them in power."

Observers say many voters regard the Left Party as too radical to govern on a federal level. But Germany's Green Party was also considered too extreme when it burst on the scene in the early '80s. But in 1998, it entered Germany's governing coalition with the Social Democrats, where it stayed for seven years. 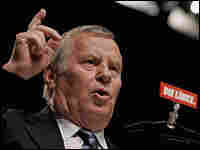 Lothar Bisky, a co-leader of the Left Party, delivers a speech in Dortmund, Germany, in 2007. Ralph Orlowski/Getty Images hide caption 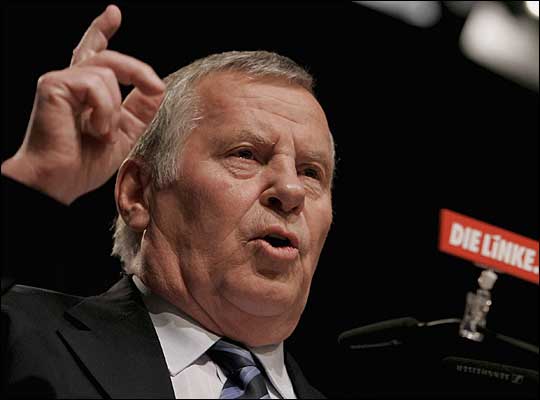 Lothar Bisky, a co-leader of the Left Party, delivers a speech in Dortmund, Germany, in 2007.

Germany's Left Party might be new, small and radical, but it has made deep inroads in the national political landscape. In its nine months of existence, the 72,000-member group has helped put social justice atop the national agenda, and its message of closing the gap between rich and poor increasingly resonates with Germans who believe economic growth is passing them by.

As an opposition voice, the Left Party has pushed its more established rivals to adopt policies they initially opposed. Last year, for example, the ruling "grand coalition" of center-left Social Democrats and center-right Christian Democrats introduced minimum wage and extended unemployment benefits. Newspaper editorials have called this development "Germany's shift to the left," or in reference to Left Party co-leader Oskar Lafontaine, "the Lafontainization of the Republic."

Lafontaine, a former Social Democratic figurehead, describes himself as the people's advocate. "The rich are getting richer, while working people increasingly struggle to make ends meet," he recently told a group of coal miners. "That's immoral."

In his fervent, crowd-pulling speeches, he spreads his vision of a society sheltered from the damaging effects of globalization. His solution involves a welfare state, more social benefits, more taxes. And he has called for an end to all German military missions abroad, including Afghanistan.

Although the Left Party has become a political force in Germany – with representation in 12 of the country's 16 state parliaments after this year's regional elections – some political observers say it promises more than it can deliver.

"The Left Party gives people simple solutions without having to prove that these solutions can be financed," says Oskar Niedermeyer, a political analyst at the Free University in Berlin.

Social Democratic parliamentarian Johannes Kahrs is even more critical. Like many politicians, he considers the Left Party populist and believes it makes unrealistic promises. "It's like Christmas and Easter and everything you can wish for on one day, but it just doesn't work," Kahrs says of the party's wealth redistribution program.

And the knocks against the party aren't limited to its policies. The Left Party counts among its ranks hardcore communists and former members of the Stasi, the feared secret police agency in what was East Germany. Conservative Interior Minister Wolfgang Schäuble recently described parts of the Left Party as "a clear extremist threat," and Germany's domestic intelligence services have been monitoring individual members since the party's inception.

In 2007, Lafontaine merged the reformed communist party of the East with a small, Western left-wing party. The product of that union was Die Linke, the Left Party, which Lafontaine leads along with Lothar Bisky.

Lafontaine, 64, has made a remarkable political comeback in recent years. He was the Social Democratic Party's chancellor candidate, party chairman and federal finance minister in the 1990s. But he grew disillusioned with the realpolitik of the SPD and left three years ago.

Lafontaine re-emerged last year when he established the Left Party and, in doing so, positioned himself as an opponent of his old party.

The Left Party's burgeoning presence sparked a political crisis within the SPD last month following the regional elections. The SPD had planned to establish a minority coalition government with the Left Party in the state of Hesse, despite a pre-election promise not to work with the radical group. The ensuing internal and public debate profoundly damaged the SPD's credibility, and the party's approval ratings have been at record lows ever since.

With the Left Party firmly on Germany's political map, it joins the conservative Christian Democrats, Social Democrats, Libertarians and the Greens in what is essentially a five-party landscape.