Accessibility links
Why Kids Curse No one expects a 3-year-old who dresses like a princess to swear like a sailor, and yet some do. Experts say it's a part of the process of learning language. 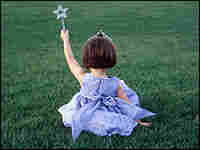 No one expects a 3-year-old who loves to dress like a princess to swear like a sailor.

But early exposure is not so uncommon. Who's to blame? Well, there's a pretty apt quote from a 1970 Pogo cartoon: "We have met the enemy, and he is us."

The "us" are parents. A few weeks ago, I put a question out to hundreds of mothers on a local list-serv asking for anecdotes about the first time they heard their children use inappropriate words.

Many responses were similar to mom Julia Gordon of Silver Spring, Md. She was in her car, in a hurry and trying to park.

"The parking lot was crazy," says Gordon, a lawyer and mother of a four-year-old daughter. When someone sped into a parking space she had been waiting for, Gordon said under her breath, "He totally screwed me."

And a few minutes later, she heard her daughter parrot back the same phrase.

"I have to admit I did laugh at first," says Gordon. "Then I immediately stopped and told her, 'We don't say that word!'"

The Worst Swear Word of All

Psychologists say it's no surprise that children mimic words and phrases.

Bloom explains that children are using words to communicate instinctively. They don't yet have the judgment to take a step back and think about whether a word is appropriate for a given situation.

Bloom remembers one day when his son Max, then 6, came home from school.

Max asked in a hushed voice: "Dad, do you know what the worst swear word of all is?"

His son then went on to explain that "damn" must be the worst. When Bloom asked why, his son said, "I listen to my babysitter talk on the phone, and she uses the 'f' word, and the 's' word, but she never says 'damn!'"

A study by the Parents Television Council found that about once an hour children watching popular children's networks will hear mild curse words such as "stupid," "loser" and "butt." The scope and frequency can rise immeasurably with exposure to adult programs and popular music.

Lessons from the Playground

As an experiment with his children, Bloom and his wife tried their hand at creating their own family curse words.

"So one of them was 'flep,'" says Bloom. Whenever someone would bang their foot or hurt their toe, they'd scream "flep" as if it were an obscenity.

The experiment was very short-lived.

"It was a total failure," says Bloom. "The children looked at us as if we were crazy."

The story gives one of Bloom's mentors, Harvard psychologist Steven Pinker, a chuckle.

"Children are far more influenced by peers," says Pinker. "That's why kids of immigrants end up with the accent of their peer group rather than their parents."

When it comes to choosing words, our society has a bent toward novelty. Pinker explains we're forever coming up with new ways to express that things are "good" or "bad." He says there's always a little "semantic inflation" going on.

"When I was a kid and you said something sucks," says Pinker, "it was pretty clear what sexual act they were referring back to." But today kids have no idea. The term is just part of their common language.

Frequent use, over time, has stripped away the original connotation. Pinker says the evolution of "sucks" is similar to that of "jerk" or "sucker."

"There is an assumption that 'sucks' was a reference to oral sex," explains Jesse Sheidlower, editor-at-large of the Oxford English Dictionary. Some scholars debate this, but Sheidlower says perception is what matters.

"Suck" may sound edgy or obnoxious to middle-aged ears, but parents may be at a loss to explain why it's a bad word, especially to an 8- or 9-year-old. "It brings up a conversation you might not want to have right now," says Sheidlower.

Not everyone's on the same page about what constitutes offensive language. The boundaries of what's acceptable vary from community to community and family to family.

Some moms listen for attitude and intention in their children's words. Chevy Chase, Md., resident Sarah Pekkanen is the mother of two boys, ages 6 and 8, and she has found her dividing line.

"I would be much quicker to jump on my kid for saying an unkind thing," says Pekkanen, "even if he used perfect language to do so."

Pekkanen says a borderline phrase like, "it sucks," isn't as offensive if it's not intended to insult anyone.

A clear message about respect may be more fruitful than trying to police every word. By the time kids enter the teen world, swearing is almost a rite-of-passage.

"It's hard sometimes," says pediatrician Monika Walters. "As parents, you worry that they're going to grow up and be vagrants or a menace to society."

When parents like this come to see her or pull her aside after an office appointment, worried about vulgar words they spotted in their teens' text messages, she asks them to remember how they talked when they were 15.

Walters says if offensive language is part of a pattern of aggressive behavior, there's a problem. But in most cases, it's just the way teens salt their language.

"Obscenity is a sure ticket to adulthood," says Paul Bloom.

Or at least a way for teenagers to perceive that they sound older.

Bloom says he doesn't want to control the words his children choose to use with their friends. "That's part of growing up," he says.

Another part of growing up is knowing how to speak with adults and in formal situations. "So we'd like our children to grow up knowing when it's appropriate to use these words," Bloom says.

As most parents come to recognize, teaching good judgment is not a one-time event; it's a process.