Accessibility links
Zooey Deschanel, Tuning Up with She and Him Actress Zooey Deschanel has made a move from the big screen to the indie-rock stage, recently co-founding the group She and Him. Deschanel joins Fresh Air to discuss her music and her band's new album, Volume One.

Listen
Zooey Deschanel, Tuning Up with She and Him

"You Really Got a Hold on Me" 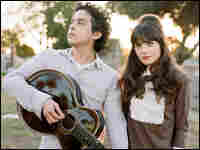 Zooey Deschanel (right) and M. Ward come together in She and Him. Carlo Allegri/Autumn de Wilde hide caption

Movie actress Zooey Deschanel has expanded her ambitions recently, moving from the big screen to the indie-rock stage. With co-founder M. Ward, she's half of the duo She and Him, which played recently at the South by Southwest Music Festival in Austin, Texas.

Deschanel, who plays keyboards and sometimes drums in the band, joins Fresh Air to discuss her no-longer-secret life as a singer and songwriter, and the new album from She and Him, titled Volume One. It was described recently in Time Out New York as "a disarming set of simple pop songs drawn from a variety of '60s and '70s styles, a perfectly charming record for the onset of spring."

Deschanel, who's dabbled in jazz cabaret and sung on the occasional film soundtrack, has starred in such movies as Elf (you might remember her in-the-shower rendition of "Baby, It's Cold Outside") and The Hitchhiker's Guide to the Galaxy. She made her screen debut in 1999's Mumford, and recently provided the voice of lifeguard Lani Aliikai in the animated surf-doc parody Surf's Up.

Deschanel met Ward, a gifted singer-songwriter widely known as a solo artist, while recording a duet for the soundtrack to the 2007 film The Go-Getter.

The songs on Volume One are an eclectic bunch — the styles range from Brill Building pop to Nashville countrypolitan, and the songs grow out of in-the-moment impulses fueled by a diverse record collection, Deschanel says.

But jazz is perhaps her biggest influence. Deschanel grew up listening to jazz greats from Ella Fitzgerald and Anita O'Day to Chet Baker and Stan Getz. "I think my knowledge of music theory is rooted in jazz theory, and a lot of the writers of standards — Rodgers and Hart, and Gershwin." Deschanel says.

Writing songs, Deschanel says, is a private thing for her. She's been writing music for years, but was "really, really shy" about letting sharing her work with anyone. She says Ward "definitely, definitely" taught her to hear her own songs differently: "I wanted so badly to do something with them, but I felt crippled by shyness about them. It wasn't until I met Matt that I really felt like I had found just the right person to work with on this stuff."

"He definitely gave me a new perspective," Deschanel says.

Album
'Volume One'
Artist
She and Him