Accessibility links
Beat Boxing with Yuri Lane The sound of beat boxing has been the background to generations of hip-hop music. But one man is using the form to express a political message of peace for the Middle East. Performer Yuri Lane talks about his one-man show, From Tel Aviv to Ramallah: A Beat Box Journey. 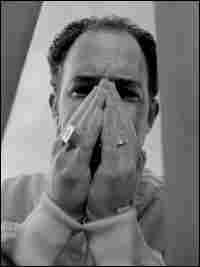 Yuri Lane is using beat boxing, a form of hip-hop expression, to bring attention to the Middle East conflict in a new stage production, From Tel Aviv to Ramallah: A Beat Box Journey.

The Holland-born actor and musician began mastering the art form in math class, while growing up in San Francisco. "I did not have the ability to do algebra," says Lane, who describes beat boxing as simply "music with your mouth."

The classically trained actor credits the expression with helping him shape his range of performance: "You use your voice as an instrument to become an actor," he says, "so beat box lent itself to that."

Lane's current stage production is described as a modern take on the biblical story of Isaac and Ishmael. The play focuses on a Palestinian Internet-cafe owner and an Israeli delivery man, and how their lives intersect via a West Bank checkpoint. In the one-man show, Lane embodies 15 different characters through artistic expressions of mime, beat boxing, and dance.

"I believe in freedom of movement, and that everyone should have the power to express themselves," he says.

Lane is practical in describing his theatrical approach to the stage play, which was written and directed by his wife, Rachel Havrelock.

"I try to bring out the humanity [of the Middle East conflict]," he says. "To get away from the headlines and the images of violence, and to show that these are people trying to fulfill their dreams, like everybody else."

Yuri Lane recently visited NPR for a performance chat between breaks in his performance at the Baltimore Center Stage Theater.