Accessibility links
The Human Body's Frailty and Splendor College administrator Carole Chabries had three pregnancies in three years, but two of her children were born prematurely and died. The daughter who lived has helped Chabries come to appreciate the complexities and frailties of the human body. 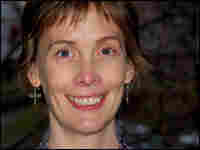 Carole Chabries is Assistant Dean at Union Institute and University in Cincinnati. After putting herself through college by teaching fitness classes, Chabries says she thought her body could do anything. Courtesy of Carole Chabries hide caption 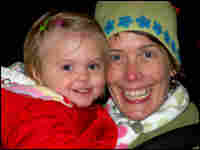 Carole Chabries with her daughter Mairin, which is Irish for "longed-for child." Chabries and her husband Shannon are expecting another child. Courtesy of Carole Chabries hide caption

I have long been proud of not believing, of blithely considering myself too practical for something so intangible.

I spent the rest of that year trying to believe in hope. Perhaps I succeeded, for on Christmas Eve I found myself unexpectedly expecting again. Hope even carried me through until August 2006, when my second daughter was born, on time and alive.

Luck comes and goes. Merit, I guess, is relative. Even hope is not enough.

In September 2007 I was again in a delivery room, again with prematurely ruptured membranes, again delivering a daughter too young to live. Hope, luck, good fortune: They were obviously meaningless. What mattered, what so obviously mattered, was biology. Our ordeals — my own body's failures to keep my daughter's alive — were simply, purely, biological.

My first daughter was her own kind of biology lesson, stunning in her loveliness. She was a miniature anatomy textbook: an illustration of pure muscle and bone, a perfect network of veins and arteries crossing limbs. Holding her, I realized I had never before touched a dead human body. Sleepless next to her, I marveled at my own body, pumping blood, taking in air. Even as I wept onto her chest, her body molded into mine, head weighted against my fingertips, hips nestled into the palm of my hand.

Nobody planned these deaths. I didn't earn them. They aren't bad luck or even accidents. They are simply the result of human bodies at work.

Belief did not come easily, but our bodies — mine and my daughters' — have brought me around. Now I believe: I believe in the biological complexities of human bodies. They break down and grow strong; their vital processes do not fail, and they do. I believe in the body's unpredictability and frailty, in its heartbreaking splendor.

My one living daughter is somehow a little sister, a big sister and yet an only child. Her body is gloriously alive. And every time I hold her — every time our bodies touch — I feel the strange and wonderful vitality that accompanies my new-found belief.