Accessibility links
China's Provinces Feel Crush of Tibet Crackdown A lockdown following anti-government protests in Tibet spreads to other Chinese provinces, where monks say they are confined to monasteries and forced to denounce the Dalai Lama. The unrest has undermined Beijing's ideal of ethnic harmony. 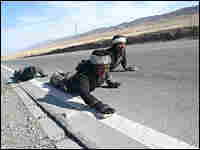 Pilgrims prostrate themselves along a highway near Qinghai Lake. These young Tibetan men say they have no Chinese friends. Louisa Lim, NPR hide caption 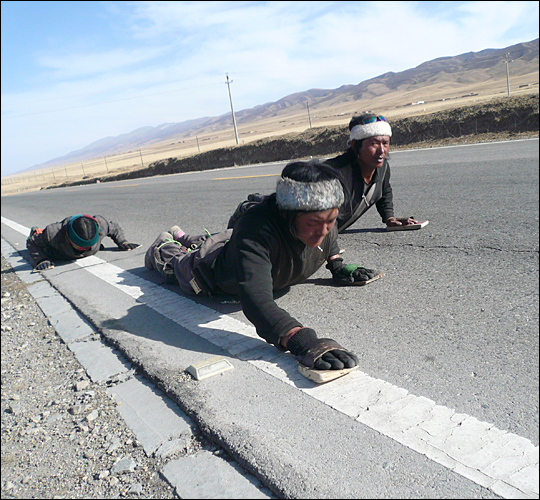 Pilgrims prostrate themselves along a highway near Qinghai Lake. These young Tibetan men say they have no Chinese friends.

As China tightens its grip on Tibet, it is also stepping up controls on monks in other Chinese provinces, forcing them to denounce the Dalai Lama and forbidding them from leaving their monasteries. The crackdown has exploded Beijing's myth of ethnic harmony, leaving both Chinese and Tibetan communities living in fear.

The current crisis began after anti-government protests by Tibetan monks earlier this month in Lhasa, Tibet. China says the Dalai Lama instigated the unrest, but the exiled Tibetan leader has denied the claim.

A battle over the Dalai Lama is now being played out in Tibetan monasteries in the provinces. Chanting the scriptures is now taking second place to a new government-orchestrated patriotic education campaign.

Monks in Qinghai province, bordering Tibet, are being placed under constant surveillance by Chinese security forces. One monk said they now spend most of their days in political meetings at which they are forced to denounce the Dalai Lama and call him a terrorist.

"In the meetings, they say the Dalai Lama wants Tibetan independence," said the monk, who asked to remain anonymous for fear of retaliation. "They say he's isolated internationally, he's got no support. They say Tibetan independence will never happen."

The monk says there were no demonstrations in his monastery, though he wishes he could have participated. And new restrictions have been placed on the monks in his monastery and in many others in the surrounding area, he says.

"Now we aren't allowed out of our monastery. We have agents of the state security apparatus watching over our lives," he says. "They want all of us to live together in one room and eat together with them. When the agents aren't there, we monks aren't allowed to stay in a room together. We don't have any freedom."

There are signs that the lockdown affects not just the monasteries, but entire Tibetan regions of Chinese provinces that have seen unrest. In a once-bustling Tibetan market in Xining, the capital of Qinghai, shopkeepers say business has completely disappeared.

"Before, we had lots of Tibetan customers. Now, nobody's allowed out of their towns," says the Tibetan boss of a shop selling religious objects who asked that her name not be used.

"Of course we're scared. All Tibetans are scared. It's not just about myself, it's about my entire country," adds a fellow Tibetan.

And he means Tibet, not China. The wave of unrest sweeping over Tibetan regions of China has exposed Beijing's failures and undermined its carefully nurtured ideal of ethnic harmony.

That much is clear when venturing into the vast expanse of the Tibetan plateau, where grazing yaks make tiny black dots against the enormous barren mountains. Five young pilgrims are prostrating themselves along a road circling Qinghai Lake. The wooden paddles in their hands scrape along the highway, as the pilgrims road-surf, throwing their bodies facedown alongside the cars and lorries. They will do this for two months, they say, as a devotional practice. They describe their lives as lived within a Tibetan enclave.

"I've got no Chinese friends," says Tse-chen, 20. "Because we're Tibetan. We don't have anything to do with the Chinese."

China has poured money into developing Tibet and the surrounding provinces in the past half-century, hoping for gratitude and loyalty in return. Tsering Dolma, 69, is among those who have benefited. The government pays her a regular salary for herding sheep, and because her family is classed as poor, she gets extra government subsidies.

"My life is much better than my parents'," she says. "My parents were very poor, and now life is better because of the government's good policies."

But even the subsidies now seem to heighten local tensions, with several Han Chinese complaining that Tibetans receive special treatment. Beijing has encouraged the resettlement of Han Chinese to push forward with economic development and heighten its control of Tibetan areas. It's a measure of the resentment against this policy that Tibetan rioters in Lhasa attacked Chinese businesses two weeks ago. Now other Chinese living alongside Tibetans are scared.

"There are many Tibetans here, so we're worried," says Ye Fulin, who runs a restaurant on the banks of Qinghai. "What would happen to us if the Tibetans here become violent? This is their kingdom."

These days, it seems the one thing Tibetans and Chinese have in common is fear.