Accessibility links
Pin-Up Queen Turns Hollywood Mayor Race Pink For nearly three decades, the late Johnny Grant posed and schmoozed on the Walk of Fame as Hollywood's honorary mayor. Now, a handful of senior celebrities and an aging billboard queen are pushing to become his replacement. 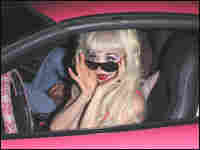 Angelyne, one of the hopefuls in the Hollywood mayor's race, made a hot pink Corvette her signature car many years ago. Here, she pulls up to the ArcLight Theater in Hollywood in 2005. Stephen Shugerman/Getty Images hide caption 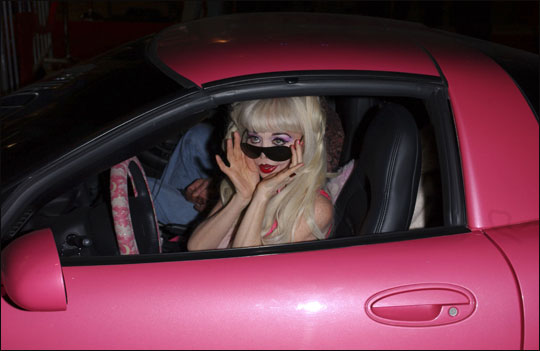 Angelyne, one of the hopefuls in the Hollywood mayor's race, made a hot pink Corvette her signature car many years ago. Here, she pulls up to the ArcLight Theater in Hollywood in 2005. 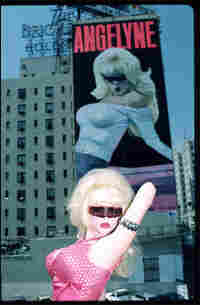 Angelyne's image has reigned over Hollywood's streets for decades. Here she poses with yet another billboard in 1987. She says her fans encouraged her to campaign for the mayor post after she lost a bid for governor of California and mayor of Los Angeles. John Barr/Liaison via Getty hide caption 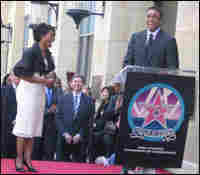 Angela Bassett gets a star along the Hollywood Walk of Fame. Leron Gubler (center), the president of Hollywood's Chamber of Commerce, watches from the ground as actor Rick Fox (right) offers a dose of laughter in support of his friend. Mandalit del Barco, NPR hide caption 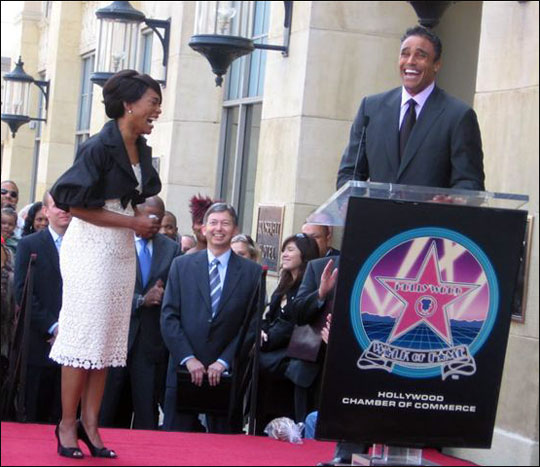 Angela Bassett gets a star along the Hollywood Walk of Fame. Leron Gubler (center), the president of Hollywood's Chamber of Commerce, watches from the ground as actor Rick Fox (right) offers a dose of laughter in support of his friend. 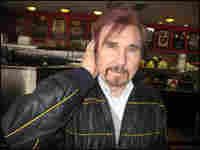 Hollywood isn't a real town, and the mayor's job is strictly honorary. But a lack of payment never stopped the late Johnny Grant from carrying out his duties on Hollywood Boulevard's Walk of Fame. For nearly three decades, he enthusiastically posed and schmoozed as inductees received their immortal sidewalk star.

Grant passed away in January at the age of 84. Now, a handful of senior celebrities and an aging pin-up queen are pushing to become Tinseltown's next official master of ceremonies.

There's more to the job than a sparkly smile.

"Johnny Grant knew everybody, and he always made you feel at home in his city," said Angela Bassett as she received her star on the Walk of Fame last week, before adoring fans and fellow actors Laurence Fishburne and Forest Whitaker. "We miss him dearly and I know he's looking down on this boulevard today."

Leron Gubler, president of Hollywood's Chamber of Commerce, is filling in for Grant until a replacement is found. The fact that the position will be filled by the chamber, without input from voters, has not stopped the campaigning.

Among the hopefuls is "Angelyne," a self-professed "blonde bombshell billboard princess" whose provocative image has loomed over Hollywood since the '80s.

"I've been called the saving grace of Hollywood, the muse of Los Angeles, the inspiration of glamour," she said from a cafe on Sunset Boulevard, in a characteristically tiny mini-dress.

Undeterred by failed runs for Los Angeles mayor and governor of California, Angelyne is running for mayor on a platform of hot pink glamour.

"If it's somebody who isn't glamorous, who cares?" she pouted. "But it's important for me to be in the position. Me, me, me, Angelyne, 'cause I'm so much a part of Hollywood. It just needs to be me. That's it. There's nothing else to say. Boom!" she exclaimed before returning to her hot pink Corvette.

Angelyne has some stiff competition: Gary Owens, the voice of numerous radio and TV programs, including the legendary Rowan and Martin's Laugh-In, says Grant hand-picked him as his successor.

"Well, it is an honorary mayor's job. And there is no money in it. But it's a joy," he said from a deli in Encino, where he was once named honorary mayor after comic Tom Conway left the post. In the early '60s, Owens also took over the job of honorary mayor in Woodland Hills for comic actor Buster Keaton.

Owens is running on a platform of connections. The job is largely about PR, he said, and his phonebook boasts thousands of celebrities, including Hollywood's honorary mayor for most of the '70s, longtime pal Monty Hall.

No Deal for the Deal-Maker

Hall, who shot to fame with this TV game show Let's Make a Deal, is rumored to be in the running again as well.

"Oh no, no, no. Been there, done that," he told NPR, adding that he'd rather raise money for charity than glad-hand with celebrities and ride in the annual Hollywood Christmas parade. "I've had four hospital wings named for me. That's more important."

He got his star on the Walk of Fame back in '73, but he doesn't see much value in it.

"A star in cement is something people trod on, they walk all over you. It doesn't give you an Oscar."

Meanwhile, Hall is rooting for Owens, and has "no comment" about Angelyne's prospects. Regardless of who gets the post, he urges the person to have fun.