Accessibility links
Arthur Penn, Realistic Violence in 'Bonnie and Clyde' Director Arthur Penn changed the face of cinema with his film, Bonnie and Clyde. The graphic realism of the last scenes have influenced television and movies since the film's release in 1967. 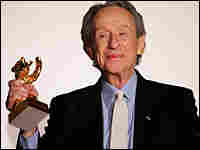 In the climax of Arthur Penn's 1967 classic film, Bonnie and Clyde, the bank-robbing duo's days of crime end abruptly when they are gunned down in a shower of bullets.

It's a realistically violent scene, shot in slow motion, which has been both praised and criticized for its brutality.

Penn says that the scene was influenced by media reports and images of the Vietnam War, which were broadcasts daily during the filming of the movie.

"It was a time," he says, "where, it seemed to me that if we were going to depict violence, then we would be obliged to really to depict it accurately; the kind of terrible, frightening volume that one sees when one genuinely is confronted by violence."

To achieve a measure of realism, Penn developed a system of camera settings that would lend both slow-motion and a spastic effects to the scene:

"The intention there was to get this kind of spastic motion of genuine violence, and at the same time, the attenuation of time that one experiences when you see something, like a terrible automobile accident," he explains.

It's a technique that's become more mainstream since the release of Bonnie and Clyde, but Penn asserts that he paved the way for other directors.

"God knows we've been imitated thousands and thousands of times now," he says. "Every time you see somebody attempting violence, they go into that basic slow motion. Well, in American films at least, we did it first."

A new two-disc collector's edition of Bonnie and Clyde was released this week.