Accessibility links
Is the U.S. Army Operating a 'Back Door' Draft? Ann Scott Tyson, a reporter for the Washington Post, explains the military's policy of extending troops' tours. It's known as "stop loss" — and is the subject of a movie of the same name due in theaters today.

Is the U.S. Army Operating a 'Back Door' Draft?

Is the U.S. Army Operating a 'Back Door' Draft? 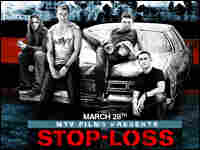 Ann Scott Tyson, a military reporter for the Washington Post, explains the military's policy of extending troops' tours. It's known as "stop loss" — and is the subject of a movie of the same name due in theaters Friday.

By January 2004, however, Tyson says the orders — originating with then-Defense Secretary Donald Rumsfeld — began to affect regular Army units. Today, she says, the so-called stop-loss policy means that virtually every soldier — in "blanket fashion" — can be summoned for active duty up to 90 days before his or her original start date, and also can be kept on duty 90 days beyond his or her end, or separation, date.

To make it clear how those 90 days can become 500 days, Tyson describes one scenario. If a period of 90 days gets tacked on at the end of a soldier's tour — say, for instance, 10 days before she was to end her military commitment — the military can, during that 90-day "extension," send the woman to Iraq for yet another tour. "Then you're talking about a year or two years of service you didn't count on," she says.

The result is not a draft, which was abolished in 1973, Tyson says, but the consequences are just as severe. She points out that because every man or woman serving in the U.S. military volunteered to do so, they cannot accurately be called "draftees."

"But they haven't volunteered to serve for that long," she says. And when a soldier is made to serve another 15 months in Iraq, she says, "That can be a life or death situation, obviously."

Tyson says the extensions are probably most devastating for the families. As for the soldiers, she says that because this is a blanket policy, the men and women know it's coming. "There's a sort of resignation," she says.